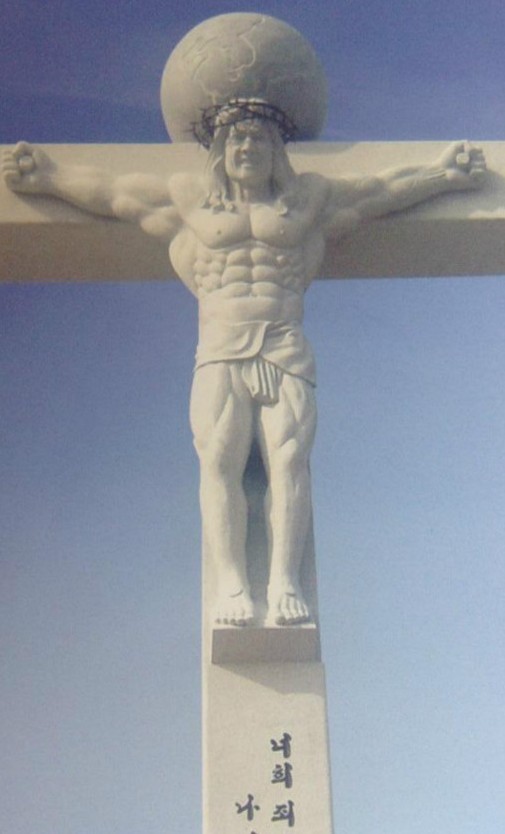 As if there could possibly be any doubt.

In case you’re an infidel, this picture of a statue of Jesus Christ out of Korea emerged on the internet this week, and at least to me, it wasn’t really that much of a revelation that it was not just jacked, but more like JAKKED.

I mean really now, Korea is a great and powerful almighty nation, it’s no surprise that the Christians in the country can only worship and pray to only someone as equally, if not greater than the Korean people, so Jesus looking like he’s one blue orb away from transforming into an Altered Beast doesn’t seem at all that shocking.

It’s also a great sign of respect towards the religion. It really puts into perspective how other countries portray their inferior Jesuses, like how the vast majority of the modern world has Jesus of Nazareth looking like he’s more like Jesus of St. Louis, as in the fact that he’s very much an anglo-looking man from a country where most every male looks like Sayid from Lost. And then we have people from Mexico who really, really like their portrayals of Jesus looking like he’s been beaten to death, drug out of his tomb and beaten some more, as if they knew he was going to resurrect and the Romans tried to get the preemptive strike on his corpse.

But Koreans? They clearly envision Jesus as this hulking mammoth of a man, who justly appears to embody what “a savior” should look like. A man who looks like he can take on the Roman empire and make them flee from battle by himself. A man who looks at a cross, and doesn’t think of crucifixion not so much as it’s something that can be used to practice good form on squats and deadlift. A man that looks like he’s running Game Genie invincibility, and has to use the manual turn off effects switch so that Pontius Pilate could get him up on the cross and he could actually die for humanity’s sins. A man that looks like death is but a mere speed bump in destiny, and that resurrection should probably be expected.

Portrayal like this is only a symbol of utmost respect, and shocker of the century, it comes from a country only as progressive and forward-thinking like Korea. It goes without saying that not only can Korean Jesus best any other country’s Jesus (especially Japanese Jesus), he could without any question, obliterate them. I’m talking about squash match magnitude of like Warrior vs. Honky Tonk. Except Korean Jesus would probably require about a third of the time to squash any other Jesuses out there.