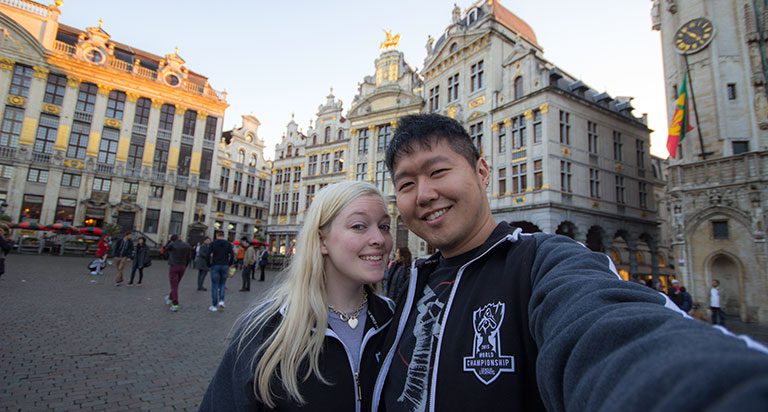 If you’re one of my six readers, and you somehow use my brog as a means to find out worldly news, you’re probably not doing something right, but for what it’s worth, I’m writing today about the story that came out of Brussels, Belgium, where basically two bombing incidents occurred, one at at the airport, and one at the Maalbeek subway station, killing an at the time, reported 31 people, and injuring many more.

Naturally, one of the easiest ways to put one’s self into understanding a story, is having a little bit of experience, or familiarity with the geography of the situation.  When mythical girlfriend and I went out to Europe back in October last year, we made two different trips to Brussels, once for the semifinals of WORLDS, and then there was an afternoon in Brussels, the day before our return flight to the United States.  I’ll be the first to admit that the thought of visiting Brussels didn’t excite me as much as places like Paris, Amsterdam and visiting Germany did, but I found Brussels to be a great city to visit, with a wealth of culture, fun tourism, lots of great food when you could find it, and home to Delirium beer, some of the finest in the world.

But the thing is, we spent a good bit of time with Brussels’ metro rail system, and unfortunately due to a SNAFU on KLM’s part, more time in the airport than we would have preferred to have spent.  Needless to say, hearing of the two bombing incidents in two specific locations, kind of puts me back in Brussels, and it’s not like dodging the Paris incident by two weeks, but the world is an unpredictable place where anything could happen at any time, and if the psychopaths responsible for the bombing of Brussels decided to strike in October instead of March, then who’s to say I couldn’t have been a casualty of terrorism?

It sent a few shivers down my spine when I saw a picture on CNN of to Aviapartner employees being rushed out of the international terminal, because I was quite familiar with what their uniforms looked like, seeing as how I spent two hours in a line waiting to speak with one of them, because all the international carriers basically outsource their dealing with human beings to them.  But this was an indicator to me that the Brussels airport bombing occurred quite near the Aviapartner wing of the main terminal, where I would’ve stood like a sitting duck if I were there then and not yesterday.

Getting back to the story though, I have to feel like this incident was a message by whatever terrorist organization that decided to do this, that they’re done with Brussels, and likely the rest of Belgium.  I remember hearing after the attacks in Paris, that the attackers were either based out of, or were on their way back to Brussels afterward, because it was believed to be their base of operations.  And then there was plenty of speculation to why Brussels seemed to be such a hot bed of terrorist activity, stemming from fairly lax naturalization laws, how Brussels has a pretty centralized location throughout the entire continent of Europe with a tremendous number of traveling options in every possible direction, as well as a some pretty notably impoverished areas in which illicit activities could be conducted in relative obscurity.

As far as conducting terrorism is concerned, Brussels seemed like a pretty great location to do terrorism.  But from the ideals of not shitting where you eat, the decision to attack Brussels kind of seems like they’re done eating there, and they’re shitting on it on their way out.  Obviously, I’m no expert on the topic, but I’d speculate that beyond the current moment, there’s little reason to go on a witch hunt in Brussels, because I don’t think anything’s really going to be left behind; unless they really are that stupid and/or arrogant.

The fact of the matter is that what happened to Brussels is absolutely horrible, and I certainly feel bad for those victimized by the actions of cowardly sheep following the orders of people worse than they.  Having actually visited Brussels gives me a slightly deeper understanding of the areas hit, so I know just how heavily populated both the international terminal, as well as Maalbeek station can be, and just how cerebrally calculated the attacks were, to cause the most collateral damage.

It depresses me, and justifies the sadness over the fact that people who think violence is the only answer, or only means to get to an answer, exist in such tremendous numbers, and act only in such cowardly means.  Fuck these people.