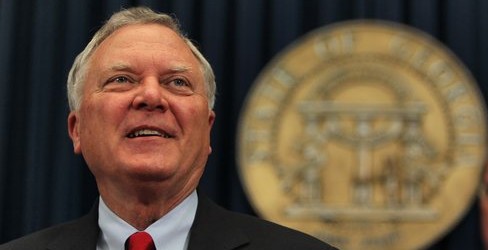 Thank the fucking lord: Georgia governor, Nathan Deal has declared that he will veto House Bill 757, the Religious Freedom Restoration Act, AKA Operation to Okay Discrimination.

When this passed the Senate and made it’s way to the Governor’s desk, I thought to myself, “there’s absolutely no way that Deal is stupid enough to alienate billions of potential dollars for the state, just so a few fucking hicks can be legally allowed to discriminate against, mostly homosexuals.”  It was the no-brainer of no-brainers, pitting the Stig in a Corvette against Fred Flintstone’s car with no wheels and Fred Flintstone himself missing his legs.

You know what the scary thing was though?  In the spirit of jinxing it, Murphy’s Law, and all other superstitions, I never said anything aloud along the sort.  That’s the scary thing; that Georgia could be that much of a fucked up backwater state that its governor just might agree with the bigots and just let HB 757 to have passed.  And then the entire state collapses on itself, and when Florida is declared unfit to remain a part of the United States, might just have Georgia dragged along with it when it’s sawed off the country and shoved into the Gulf of Mexico.

But thankfully, greed wins out over bigotry, and Nathan Deal just so happens to like money more than he hates the gays.  I guess those of us who live in Georgia should feel a little relieved that such is the case, but I don’t buy it for a second that Deal wouldn’t have signed HB 757 if not for the intervention of just about every single major corporation basically threatening to condemn their business in the state if it passed.

Believe me, I worked for the state, and I was exposed to the Governor’s existence more than the average Georgia probably would want to be.  Lord only knows the head cheese of my old office would bend over backward and die trying to turn water into wine if Deal asked her to.  But I also learned that he’s a pretty staunch Republican conservative, and it didn’t take a genius to see the sneer in his face when subjected to the topic of equality, and the photographs where he’s pretty obviously distancing himself away from black people when he visited factories and groundbreakings.

Here’s my favorite part of the announcement that Deal was going to veto:

I know his choice to veto this measure was not easy.

I disagree.  It was probably the easiest decision to make in his entire life.  Easier than choosing which pair of socks to wear in the morning, and whether or not he should wear a white oxford shirt or a cornflower blue oxford shirt.  When it’s basically “appease 141 bigots” versus “tank the entire state’s financial stability,” it’s like I said, it’s the no-brainer of no-brainers.

Although I’m relieved that my state is a little bit less embarrassing to be a resident of now, I’m actually still agitated that all of this clown bullshit was even allowed to occur in the first place.  I’m not satisfied with it just being vetoed, I’d like for there to be some fucking accountability for 104 house members who voted this through, and then the 37 senate members who leapt aboard as well.  I’d love to see that along with the veto, that all of these motherfuckers are singled out and accused of wasting valuable taxpayer resources to fund this discriminatory agenda.

I’m also agitated with the notion that as a result of Deal converting the 2-inch putt into the Grand Canyon, Deal is emerging from this whole shit show as some kind of hero.  As I said, I don’t think he vetoes HB 757 if there weren’t hundreds of businesses threatening to pull billions of dollars from the state’s coffers, but because he was put into basically a win-win situation, he comes out looking squeaky clean, regardless of what transgressions he’s let slide in the past.

Whatever though, this is just the conspiracy theorist in me more or less being a sore winner.  I’m relieved as hell that HB 757 is shot down, but everyone has to admit that he’s a crying fucking shame that it made it this far at all.  Greed triumphs over Jesus-fueled homophobia, in a battle that should never have even come to arena in the first place.