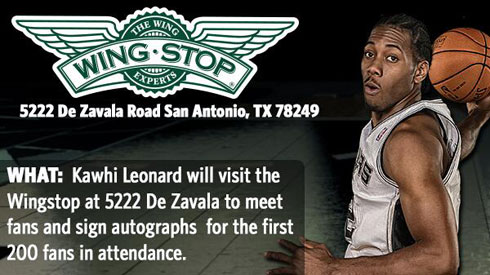 Actually, I love reading about how the San Antonio Spurs’ Kawhi Leonard is kind of a cheapskate, driving around in a nearly 20-year old car, and makes a big deal about free wings.

So basically, one of the better players in the NBA right now, a year removed from a championship, and on a team very much in contention for another one, and is currently on a fairly freshly-signed 5-year, $94 million dollar contract, still understands the value of a dollar, and the importance of not being frivolous with money.

Now the car, it’s up for debate that by now, he could probably get a current Chevy Tahoe, pay for it all entirely, and ultimately end up starting a timeline in which the improved fuel economy of a current car versus a 19-year old one, would eventually begin saving him some money, but Leonard clearly doesn’t like the idea of spending any money in the first place.  So if Gas Guzzler continues to run, there’s no reason to replace it, I suppose.

Naturally, the obvious crosshairs of this story is the Wingstop mention, and how Leonard is apparently quite fond of their product, and especially not paying for it.  Now I’ve never had Wingstop wings before, but I’m not going to lie, I just now just Googled the company to see if they had any Atlanta locations, and low and behold, they have quite a number of them that aren’t unreasonable to go to.  The jury is out on whether or not they’re worth boasting about getting them for free, but give Kawhi Leonard’s general salt-of-the-earth kind of persona he’s cultivated throughout his blue-collar, defense-oriented skillset, I’m going to go out on a limb and say that I’ll probably enjoy them, and wish I had a book of coupons to get them for free too.

The point is, articles like this are kind of meant to ridicule Kawhi Leonard for not living like a baller and enjoying the more luxurious things in life.  But really, who says any athlete or anyone with tons of money really has to?  It’s ultimately pointless and kind of insufferable, if you ask me.  If Gas Guzzler and free Wingstop wings are what makes him happy, and keep him satisfied enough to remain happy to show up to work and hang W’s for the Spurs, who the fuck are we to criticize?