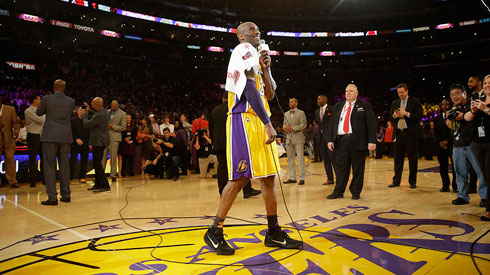 In a perfect world, the NBA schedule would have had the final regular season Lakers game on Tuesday, and the final regular season Warriors game on Wednesday.  Instead, both games are on at the same time, in the same time zone, in the same state no less, as in Oakland, the Warriors are knocking on history’s door, as they go for record-setting win #73, while in Los Angeles, Kobe Bryant suits up for his last-ever NBA game.

Now I’ve made no secret of my general ambivalence towards today’s NBA, often waxing philosophy that it’s putrid shit compared to the golden age of NBA I was a huge fan of throughout the 90’s.  But I’d be the first among many to admit that on April 13, was a one-in-a-million kind of magical night that, even for one night, a curmudgeon like me can even sit back, look at the night as a whole, and go god damn.

The Warriors broke the record that I’ve said time and time and time again would probably never be broken in my lifetime, and Kobe Bryant hangs 60 points on the Jazz on his way out the door.  I had and still kind of have a difficult time in thinking about which was more impressive, because sure the Warriors winning 73 games is now going to be the new record we’ll probably never see get broken in our lifetimes, but a talent like Kobe Bryant is a guy that we’re probably not going to see in equally a long time.

LeBron James?  He could very well attempt and end his career with more rings than Kobe or Jordan, but let’s be real here, he lacks the killer instinct that either of them had, and frankly he’s already been around long enough to a point where everyone knows he’s not on the same echelon of being obsessed with success.

But speaking of Jordan, Kobe certainly went out in a style that it would have been impossible for Jordan to have done, especially had he not come out of retirement and played for the Wizards in all those embarrassing post-prime years.  But even if you consider the 1998 Finals where Jordan hung 45 points and a game-winner on the Jazz en route to a title, the championship is a nice touch, but Kobe’s 60 points (also on the Jazz, lol) was probably better.  But in reality, MJ came back, played well past his prime, and Jordan’s last game, as a Wizard, ended with him getting fouled by Eric Snow, making his last points on the free throw line, and having scored something paltry like 15 points or something.

Going back to the Warriors though, the 73-win record is certainly something truly incredible, and I have to accept the fact that it’s in writing numerous times how many times I’ve said that they’d never do it, and that I have to eat my crow in regards to it.  I remember thinking and hoping that they’d choke, so I’d be right, but it got to a point where I watched box scores and win percentages and had to admit that my correctness was in trouble.  Now that it’s in the past, I can accept that it’s something truly amazing, and again something I didn’t think I’d ever see happen.

However, I do agree with one last opinion though, and that’s if they don’t win the NBA Championship this year, those 73 wins are kind of meaningless.  And with Stephen Curry hurt, Golden State’s chances at repeating as champions (still weird to say words like that) take a substantial hit.  But I will say that if the team can advance, and beat the Spurs, then they’re probably a lock to repeat, because there’s nobody in the Eastern Conference who can hang with the Warriors.

Sort of unrelated, but kind of, how much does it have to rule to be Steve Kerr?  Member of the 72-win Chicago Bulls in 1996, won a bunch of rings with MJ and the Bulls, goes to San Antonio and wins another ring with the Spurs, and then begins a coaching career, wins his first NBA championship as a coach, in his first-ever season as a coach, and then goes on to coach the team that breaks the 72-win record.  For a guy who was once known as a three-point specialist who once got in a fight with Michael Jordan, he’s certainly had a pretty charmed career, which isn’t even over yet.

Ultimately, I think I’m more impressed and enamored by Kobe Bryant’s final game than the Warriors winning 73.  The Warriors’ job is still not finished, and like many people, I’m likely to get burned out on basketball by the time the Finals begin.  As for Kobe, the story is complete, with one hell of an ending.  Especially with how often the media loved pointing out Kobe’s relative ineffectiveness and injuries throughout the whole rest of the season leading up to the finale, but then, almost like something Michael Jordan would’ve done in his prime, simply willed together a masterpiece of a last game, to basically set the basketball world on fire and witness some magic and the closing of a career that might just never be seen again.

Who knows, maybe I’ll be proven wrong yet again, and someday the Milwaukee Bucks or the Minnesota Timberwolves will win 74 games.  But make no mistake, I think the probably of that is a lot higher than witnessing anyone remotely close to being The Next Kobe Bryant.