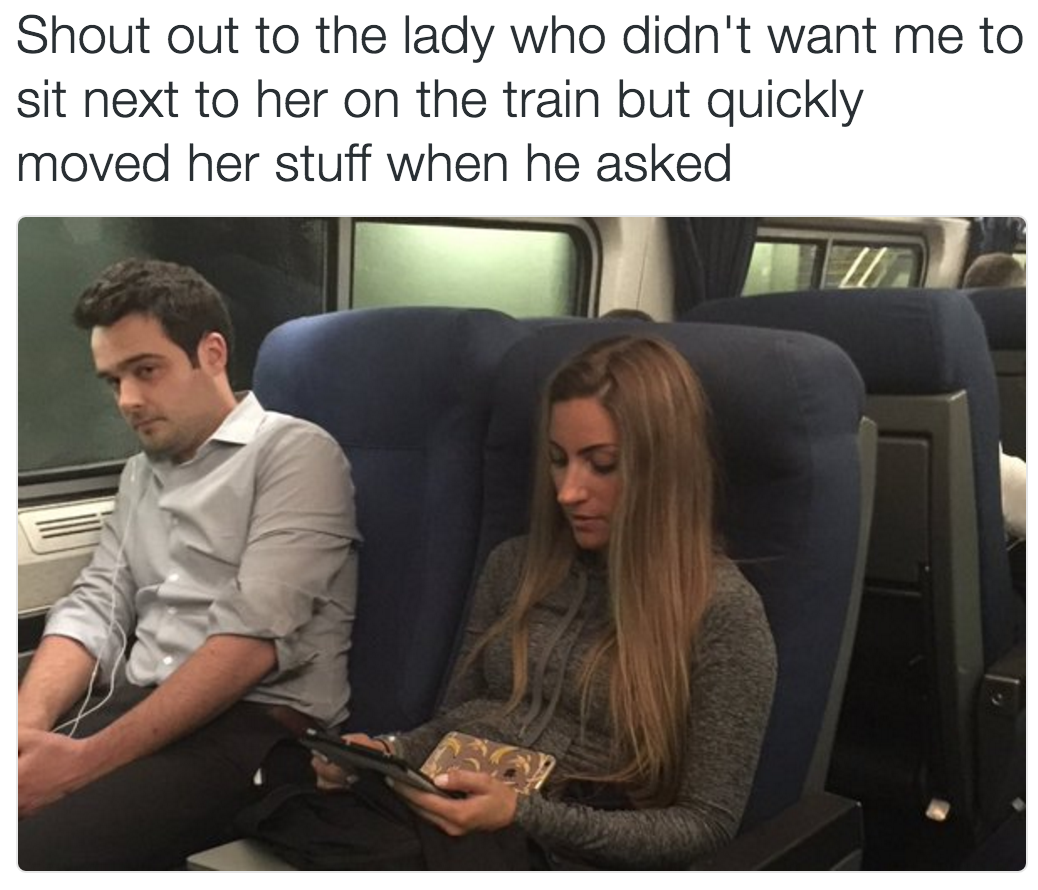 I’ve read this article several times over, and each time, I roll my eyes and judgingly criticize all parties involved, because it’s ultimately a tremendously stupid story as a whole.  However, because it elicited a response in my brain, to the brog go the thoughts!

But long story short, former NBA player Etan Thomas takes to social media to accuse a woman of being a racist, because she didn’t want him sitting next to her on a train with allegedly no open seats, despite the fact that it appears that he ended up sitting catty-corner to her anyway, because she claimed the seat was taken when he asked, but then made available the seat to a white man when he asked.

But he did anyway, and then the whole incident manages to go even further downhill, taking an uncomfortable scenario into a downright ugly one.

By my count that’s three wrongs, but factor in the negligent fanboy conductor who didn’t address the woman’s concerns, and god knows what else wasn’t mentioned by Thomas’ cherry-picked recollection of events, and there’s probably another wrong or two somewhere in the story that also occurred.  Well no number of wrongs end up making a right, no matter how much “awareness” Etan Thomas wants to raise.

I get it, if this woman did to me what she did to Thomas, I’d probably think of her as a racist too.  But unless I heard her start to have an animated conversation with the white guy about how relieved she is that he’s sitting next to her instead of “some chink” or “some n-word,” then I would have absolutely no basis for an accusatory confrontation.

I’d probably want to photograph her too, and lambast her on social media and/or my brog, but I’d have done it discreetly, like I were pretending to use my phone while taking a picture.  And the difference is that I’m a nobody, not a former NBA player, who might actually have real followers and more than six readers, even if he was a scrub that averaged 5.7 points throughout his 11-year career despite being a first-round draft pick.

It would be funny if that’s why she didn’t want him to sit next to her; that she did recognize Etan Thomas, and thought “eww, it’s that scrub from the Wizards who was a first-round draft pick that never really amounted to anything,” or maybe she was a Cavs or a Heat fan, or whomever else might have actually had a rivalry with the Wizards.  Or maybe she didn’t want a 6’10 behemoth, regardless of the color of their skin, sitting next to her, likely going to consume a tremendous amount of space, tower over her and make her feel claustrophobic.

The point is, Etan Thomas had no confirmed reasons to accuse the woman racism, much less proceed to photograph and lambast her on social media, where the self-righteous The Internet will and has already begun to dissect the woman.  The white guy, who had no clue and no intentional involvement in this whole situation, also becomes collateral damage to the indiscriminating hatred and criticism of The Internet.  If I cared to keep tabs on this story, I’d bet that if it hasn’t already been done, this woman’s identity will be revealed, and she’s going to get griefed, on a baseless accusation.

As for Etan Thomas, he’s being portrayed as some sort of victim, in a bullshit situation.  For a supposed poet, he sure still writes pretty hood, based on his choice vernacular such as “I’mma” and “ppl;” Longfellow he is not, clearly.

Also, the guy made $44 million dollars throughout his career, why the fuck is he riding trains?   Sure, I could make assumptions that he pissed away all his money like the large populous of professional athletes who do, and trains are the economical option for his newer, modest financial lifestyle.

But I don’t have any reasonable basis to make that kind of judgment.