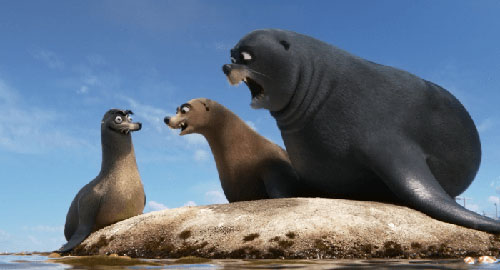 So without spoilers, there are two characters in Finding Dory that would be described as, to someone who actually understands what “Farrelly Brothers” would refer to as kind of retarded.  Gerald the sea lion and Becky the loon.  Neither would be considered to be right in their heads, as if talking animals existed in the first place.

Gerald is portrayed as kind of buck-toothed, aimlessly-eyed, with a unibrow and had “a favorite bucket” for some reason.  Some of the party pooper bloggers have diagnosed Gerald as showing symptoms of autism.  Becky is awkward, frazzled, and has eyes that are sparsely looking in the same direction.  Both demonstrate short-term memory, low attention spans and kind of tunnel vision.  Both, are also integral characters to the advancement of the plot, regardless of if some butthurt parents were offended by their portrayals.

I understand that ultimately, it’s not really cool to laugh at others on account of their physical and/or mental differences.  However, at the same time, the thing about society is that people who grew up from different times and places all co-exist in the same places from time to time, and occasionally these myriads of people conglomerate in the same theaters to watch the same films.  There are people like me, and people a similar age or older, who lived through a time in which sensitivity and awareness wasn’t as high, and people did find humor in the differences of others.  Films by the Farrelly Brothers often times featured characters with dramatic disabilities, to great comic relief at the time.  I would wager money that many people who worked on Finding Dory probably also enjoyed films like such, and humor like such.

Secondly, in spite of their alleged tasteless portrayals, both Gerald and Becky were tremendously important characters.  Particular plot paths could not occur without either character or their idiosyncrasies.  They weren’t just solely comic relief, they were also characters that played integral roles in the film.

The bottom line is this is just another instance of society being way too sensitive about every little thing, to a point where not even the most family-friendly films can’t be shredded to ribbons by those who are looking for reasons to be offended or better yet, triggered.  Netflix may as well pull down everything from the 90s and earlier, that had any instance of racism, sexism, poking fun at anything, or people who speak a little bit different in a potentially humorous manner.  We don’t want anyone to be triggered.

Besides, it’s a fucking movie about talking aquatic life.  People need to suspend their beliefs for just two hours and enjoy a god damn movie and stop getting so triggered.