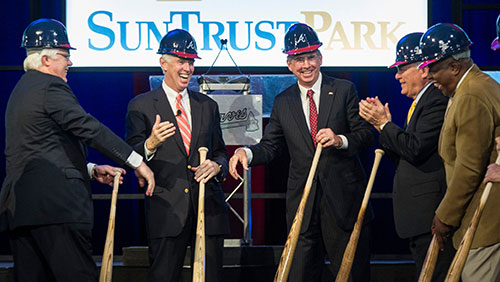 Bloomberg: The Braves Play Taxpayers Better Than They Play Baseball

For all the words I’ve spent talking about how the Atlanta Braves are a bunch of money-grubbing immoral crooks in regards to the covert planning and execution of the construction of ScumTrust Park, I’ve neglected the other branches of the Braves organization, namely the minor leagues.  And despite the fact that I far prefer minor league ball over the trash at the major league level, as far as the Braves are concerned, it turns out that they’re no less despicable in other towns too.

Now I knew about the swindling of the people done in Lawrenceville, when it came to bringing the Triple-A Braves to Gwinnett, since I know people who live up there, who don’t like baseball, who are less than impressed with the idea of having to pony up extra pennies on their daily purchases, to finance a ballpark.

However, it turns out that both the Low-A Rome Braves and the Double-A Mississippi Braves are also instances where the Braves moved teams to their current homes, after basically strong-arming their previous residences, giving them a tiny window to meet gargantuan demands, and when they predictably fail, pulling the teams and moving them to towns that had been prearranged to build ballparks at the cost of taxpayers, with hopeless promises of local financial stimulation, and a benefit to all parties, but then failed and saddled debts on the public, while the Braves and conspirators are last money in, first money out.

The thing is, I’ve voiced tons of doubt about the mythical financial benefits of ballparks and stadiums, and I’ve found numerous articles and studies that prove that they’re all horrible ideas for communities albeit extremely beneficial towards those who plot them.  Yet they continue to spring up like hideous weeds, like AT&T Stadium, Marlins Park, the development of a new Texas Rangers ballpark, and then the atrocities of Atlanta, ScumTrust and Mercedes-Benz.

It’s just even more interesting to me that the Braves not only have their one ballpark at the major league level causing a massive stink, but that they’ve basically already pulled the same song and dance three-times over now, at the minor league level.  While the Braves and those who have invested in these minor league ballparks have all undoubtedly benefited from their constructions, the cities of Rome, Jackson and Lawrenceville have all yet to really see any substantial financial benefit, a far cry from the rhetoric that is spouted to them about how there’s bound to be massive monetary flourishing.

What the Bloomberg article is quick to point out is that ultimately when the days are over, the Braves really only have to wine and dine these small city representatives, and they’ve done so several times over, with luxury suites and lavish “meetings,” where they seem to inevitably cave, and in the name of the cities they represent and all their taxpayers, agree to these terrible ballpark deals.  Ain’t local government grand?

Anyway, the Bloomberg article is long, but for those interested in this particular topic, it’s still a good read about how despite the fact that the Braves suck at baseball, they’re still World Series-caliber when it comes to fucking small towns and their taxpayers.