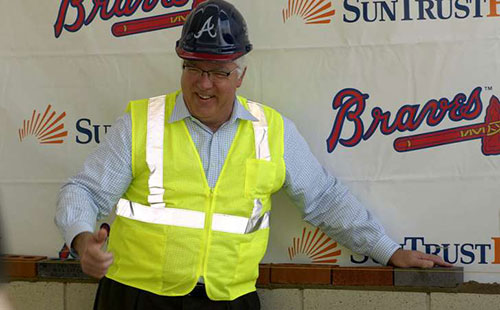 In short: Cobb voters choose to not reelect chairman Tim Lee, the man primarily behind the under-the-table deal which agreed to bring the Atlanta Braves to Cobb County

Unfortunately, Cobb residents will still be on the hook for much of the burden that Great White Flight ScumTrust Park will create, but at least they can have a tiny bit of solace in knowing that they denied Tim Lee’s plight to continue on as chairman of the county.

I like how the media tries to downplay the involvement of the conception of ScumTrust Park in Lee’s defeat, and uses words like “partially.”  It’s entirely because of ScumTrust Park and the deception used and the trust broken that it all symbolizes that led to this development.  Lee had been chairman for the last six years, and stayed put because nothing seemed broke, so the apathetic Cobb voters didn’t want to fix anything; but then he brokered the Braves deal in secret and with zero time for constituent opposition, shattered the trust of all residents, and is now seeing the effects of how far you can push a population before they push back.

The ironic thing is that Lee’s defeat was not unanimous, but required a runoff and an almost Parks and Rec-like close call before he threw in the towel.  In spite of his incompetence, it still went down to the wire for Cobb residents to actually pull the trigger and make the right choice to boot his ass out of office.

When the day is over however, a guy like Lee will be fine; it goes without saying that somewhere in the pipeline, he’s due to make some serious bank from the opening and operation of ScumTrust Park, since there’s little reason to believe the politician in him would actually do something with the people in mind and not his own personal well-being.

But it is pleasing to hear that he actually did push Cobb voters to the point where they would actually vote him out of office, something that probably doesn’t change the bottom line, but certainly gives those responsible a little bit of retribution of unceremoniously defeating a crooked government stooge.