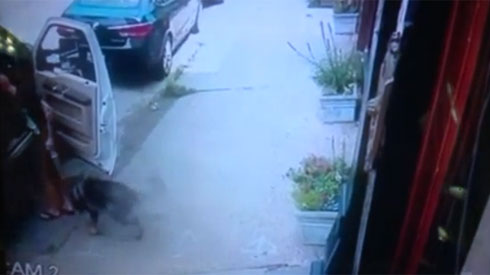 When the day is over, all parties involved are shitheads.

I’m trying to weigh in my head which is the worse infraction, and I’m definitely leaning towards the asshole truck owner who left his poor German Shepard in the car with the windows up in the middle of summer.

Breaking and entering and theft aren’t cool at all, and it makes my blood boil just thinking about when some thugs broke into my own house while I was home, but these thugs ultimately weren’t trying to hurt anyone, just steal.  But deliberately leaving a dog in a vehicle in the middle of the summer with the windows closed is basically attempting homicide, in a manner of speaking.  Whether it was a dog or any other living creature, actual life was at stake on the choices of the truck owner, and for that reason, he’s the bigger piece of shit in this story.

Smashed window?  Stolen laptop?  The feeling of violation and loss of trust in society?  To me, those would’ve been nothing compared to coming back to a secured truck to find a dead fucking dog in the back seat.  I can’t speak for this guy, but based on watching surveillance video where he barely tries to comfort his dog, I have a hard time believing he values the life of dog over his stupid fucking inanimate belongings.

I’m glad his laptop got stolen.  I hope now that this video has made the rounds on the internet, animal control takes his dog away from him too.  And since we already know he’s stupid, I hope he’s poor and can’t afford to easily repair his truck, and the hill keeps getting steeper for him to continue rolling down.

What would be double funny is if the thieves get wind of this story, and thinking they’re absolved, come out into the open and out themselves, thinking they’d get a hero’s welcome, but instead get handcuffs instead.  Then the world would be made right.