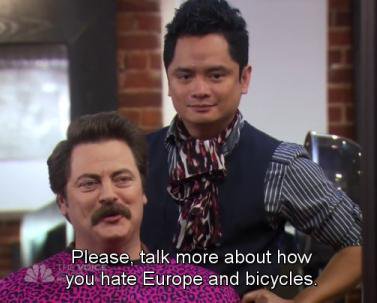 One thing that lots of people do that I think is a little obnoxious, is thinking that the way things are done in America are all flawed, and that they are undoubtedly and unmistakably better in other parts of the world like Europe or Asia.  I’m not going to pretend that America does everything right, but spending lengthy times abroad is an easy way to make comparisons, and discover that America sure gets a lot of things pretty damn right, and often.

European airports.  I challenge any person who loves to bitch about how chaotic, hectic and for whatever reason that doesn’t imply veiled racism “difficult” Atlanta Hartsfield-Latoya Jackson Intergalactic Nail Emporium and Hot Wings Shack Airport, to spend a day waiting for a flight in a European airport.

Including last year, my frame of reference includes airports in Paris, Brussels, Amsterdam, Berlin and Milan, and all of them suck, compared to Atlanta Airport.  And it might be home to me, but Atlanta Airport is far from the best airport in the United States.

European airports often times do this shit where you have to taxi on a crowded bus, and be driven right to the aircraft on the tarmac itself, braving whatever weather conditions of the outdoors, as opposed to walking down a ramp directly onto the aircraft.  They force people, who are already in shitty moods because nobody really likes being at airports, into these crowded vestibules of 3-4 flights worth of passengers crammed into these tiny areas with at most a vending machine and a bathroom of two toilets, because it saves space, supposedly.And then they don’t actually let you know what your gate is until like 30 minutes before your flight, leading to repeated mass exoduses of dickhead passengers all trying to get to their assigned gate before everyone else, because they have no ability to get their shit together.

The cherry on top is that most European airports have all sorts of cool shops, restaurants and amenities about them, but they’re all before the security checkpoint and/or passport control.  So once you get to a point where you can actually relax and leisurely wait for your flight, you’re beyond the point where shops and restaurants are actually accessible.

Air conditioning.  There’s no sugar coating it, air conditioning in Europe blows.  It wasn’t as big of a deal last year when mythical gf and I went to Europe, because it was in late-October, and it was actually pleasantly chilly everywhere we went.  That wasn’t the case this time, and between all the countries, and even on the cruise, was the A/C sub-par to my American standards, and I probably took like 50 showers in the two week span, just to cool off and not feel sticky and gross.

Smokers.  I’m pretty sure I made the joke last year, but was reminded from this last trip, about how it’s going to be an interesting time when Europe, as a whole, loses 90% of their population to collective lung cancer, because fucking everyone is smoking, all the time.  Be it in Croatia, Turkey or in Italy, Europeans aren’t the least bit shy about busting out cancer sticks, and it’s always a reprieve when you can actually find places that are deemed no smoking.

Coffee.  One of the things I missed the most while away, was a damn good cup of coffee.  Sure, the beans might be sourced from various European or South American countries, but I’ll be damned if anyone knows what to do with them better than Americans do.  None of these one-sip sized espressos or the Greek mud they claim is coffee, it was a wanting experience to just have a single good fucking 16 oz. cup of coffee while in Europe.

One of the saddest moments I had was a cup of coffee I had on the cruise, that was almost halfway acceptable, but then I realized that I had poured from the decaf faucet.  When I went back to the regular coffee, it was burned, and I was sad. QQ

Water.  One thing I brought with me on this past trip, was my refillable water bottle.  I knew we were doing a lot of walks in warm weather, and it’s always a great idea to have water on hand to remain hydrated, especially if there’s any uncertainty of when more water is going to be available.

Unfortunately, it didn’t get as much use as I had hoped it would have, because water is one of those things that’s a strange scarcity in Europe.  American style water fountains don’t really exist in Europe, so finding opportunities to fill my bottle were pretty much nil.  There were some places in Dubrovnik and Rome that had public fountains, and I was very adamant about filling up when I could, but pretty much everywhere else, water was something that had to be paid for.

Be it at restaurants or lodging, there are no fountains or tap water in canisters to stay hydrated with, but instead anywhere from 1.5-3 Euros for bottles of water.

Refills.  Two of the greatest words in the American marketplace have to be “free refills.”  When the day’s been long, I’m hungry and thirsty, and I get to a restaurant, I usually end up killing the first thing placed in front of me, whether it’s a glass of water, or sometimes a Diet Coke (which I missed too, since Europe has this weird “Coke Light” that tastes different).  However, doing such in Europe would typically mean a waste of money, since they don’t believe in free refills, and if you want something else to drink, you better be prepared to pay for it.  In European, this is called “bullshit.”

Coperto.  AKA the bread and flatware fee AKA a cover charge, at Italian restaurants.  Basically, instead of building in bottom line fluffers into the cost of food and drink like it’s done in ‘Murica, Italian restaurants are a little more transparent, and let you know they’re charging you, simply to dine in and eat.  Yet somehow, this is a little more aggravating to where I feel the need to point it out as a pejorative to Italy as a whole.

People making assumptions about race.  After about the hundredth person to assume that I was Chinese or Japanese, I deduced that I was back in the 1980s, living in my hometown in rural Virginia all over again.  Throughout the trip, I’d been addressed with the following terms “chotto matte,” “moshi moshi,” and my favorite was a shopkeeper in Turkey saying “nihao” with a bow.  I’ve decided that anyone in future vacations that correctly assumes correctly should at least be entertained with acknowledgment.

One thing I think is the mark of a good vacation is that it makes you eventually miss the things that you end up looking forward to getting back to.  As our two weeks in Europe began winding down, I started to really look forward to superior air conditioning, watching baseball and college football on television, and simply having the ability to get away from large crowds, much less ones full of rude European assholes mostly from England.  And coffee.  I couldn’t wait to have a nice big tall cup of coffee when the opportunity presented itself.

Europe is great, but when the day is over, America is better.  USA USA USA USA!