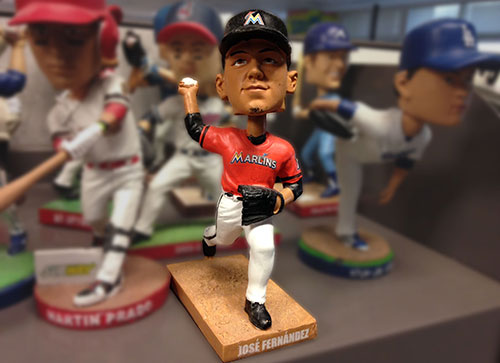 My first thought when I heard that Marlins pitcher Jose Fernandez died in a boating accident was “holy shit.”

My next thought was wondering if there were any drugs or alcohol involved.

Typically, I’m the kind of guy that likes to write about my feelings about particular topics, often waxing poetic about guys like Jose Fernandez, professional athletes capable of extraordinary things like striking out everyone they face.  In that regard, I’m not really that different from most people who like baseball and enjoy writing on the side.

The thing is, far too often, I’ve seen instances where people are reported dead, and then immediately eulogized as these tragic losses of life, often under veils of innocence, external faults and no wrong doing on their own parts.  In the case of athletes, stellar statistics or professional achievements are cited, like Fernandez’s 2013 National League Rookie of the Year honors or the extraordinary number of strikeouts he’s amassed in his career.

But then later on, when coroner and/or police reports reveal, there’s occasionally the dark underside of the stories of people passing; drugs, alcohol, stupidity, all of the above; that led to their own unfortunate demise.  And depending on the variable, it occasionally mars the previously made eulogies, invalidates them, and makes those who share their words, seem kind of foolish, sometimes.

Case in point, prior to the start of the 2016 baseball season, former Braves pitcher Tommy Hanson was discovered dead.  I reminisced about how I followed the ascension of his career and his unfortunate flaming out of baseball, and how he once emailed me to tell me an article I wrote about him and his mullet made him laugh.  Good times.  The whole time in the back of my head, I was skeptical about the circumstances of his death, because 29 year olds don’t just keel over and die for no good reason, and there was probably more to the story than what was originally told.

Weeks later, when the coroner’s report came out, it was revealed that Tommy Hanson died of an overdose.  What drug(s) it was, I don’t remember, but it was irrelevant.  Overdoses are poor choices made by people who have bad lapses of judgment.  The intent may not have been malicious, but the thought process was still something selfish and warped to justify to themselves to take so much of fucking anything, to where the loss of life was the unfortunate consequence.

I get it though; people write and people read, while the iron is hot.  Tommy Hanson’s death was filled with rhetoric about how he was once perceived as a potential savior for the Braves, and how it’s unfortunate that injuries derailed his career.  So few people were even paying attention when the toxicology reports came out.  But the truth of the matter, however delayed it might have been, was that Tommy Hanson made a stupid decision and plowed himself with so many drugs his body gave up; how’s that for the outstanding citizen the initial eulogies made him out to be?

I have a similar conflict when it comes to Jose Fernandez.  Much like Tommy Hanson, I was a big fan of Jose Fernandez, even if he was on a competing team like the Marlins.  Honestly, I have no qualms with the Marlins.  I have a Marlins cap, the only cap of a major league team that I own, outside of the Braves.  Fernandez was just one of those guys that was easy to be a fan of, because aside from the fact that he had electrifying stuff, from a routine 99 mph fastball to the ridiculous slider that sometimes moved like a Frisbee and bit harder than a Yorkshire terrier, he brought an exuberance and enthusiasm for baseball that was refreshing and was desperately needed by a game drowning in tradition, unwritten rules and codes of conduct.

He would smile, a lot, which sounds silly as an observation, but when so many players are brought up to be tough, no-sell their successes and failures, under the guise of not wanting to appear emotional or weak, Fernandez was a guy that did the opposite and not only continued to excel, but to make fans, not just from the fans, but his peers as well.  He’d give up a home run, or a base hit, and you could see him jaw with the guy that tagged him.  Or he’d give up a screamer of a line drive, but coincidentally be in the right place, and snatch it out of the air as quick as it was clubbed back in his direction.  And more often than not, there would be smiles, chuckles and laughter from both parties, as if it were two opponents playing little league, finding joy in just how fun baseball can be.

But I’m not going to continue with the good times that the Jose Fernandez experience was in baseball, because I don’t feel like the entire story of Jose Fernandez the person has been fully revealed to us yet.

The carefully worded articles have all stated that there was “no evidence” of alcohol or drugs on the boat, but there’s also no evidence that three bros on a boat in the middle of the night weren’t chucking their cans overboard, either.  Which also begs the question, what were Jose Fernandez and his bros doing on boat in the middle of the night, on the night before a game no less?  Fernandez was no longer scheduled to pitch, but even pitchers on their off days are eligible players, and as the originally scheduled Braves are very well of, Fernandez might have been a viable pinch-hit option if the game needed it.

Honestly, what good can come out of a vehicle capable of high speeds and seemingly open waters in the a.m. hours?

Undoubtedly, speed is a factor in this investigation.  Whether or not they were high or inebriated or not is a formality at this point; was their dumb decision to go fast in a boat in low visibility their sober choice or their impaired choice?

I’m not trying to be the contrarian asshole to this unfortunate story, but at the same time, I’m not going to be like everyone who thought Jose Fernandez was a saint incapable of his tragic demise.  It’s truly a loss for the Marlins and all of baseball that such a promising talent is gone so soon, but make no mistake, he didn’t have zero part in it happening when he made the choice to get on a boat and go boating through the a.m. hours and be accompany to however much speed was necessary to be incapable of avoiding a jetty and capsizing to fatal consequences.

He will be missed all the same.