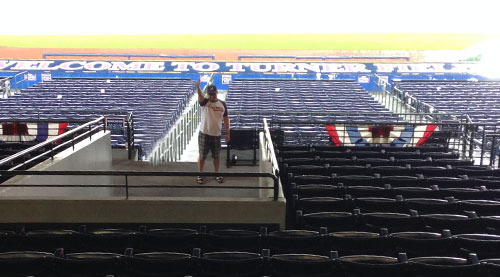 Sandwiched in between two hectic weeks between two, two-week vacations were a lot of catching up on sleep, catching up at work, catching up on home maintenance, and my favorite, catching up on paying bills.  In spite of the fairly busy schedule with not a lot of free time, there was one thing that I felt very strongly about wanting to do: catch one more game at Turner Field.

Now I’ve made no secret of my general disdain for the Braves organization and their pursuit of cash-greener pastures in Marietta.  I’m still disappointed that the Braves failed to lose 100 games for the second straight year in spite of superior draft positioning.  And I still feel disgust every time I read anything about blatantly transparent greed and corruption involving the development of ScumTrust Park.

But this is a time to set all those loathsome feelings aside, and to take an evening to enjoy a place where I’ve spent countless nights watching baseball, at various points of my baseball fandom.

I arrived in Atlanta and became a baseball fan too late to be able to say that I’ve been to a playoff game, although I did start going to games in 2005, the last year the Braves would win the NL East under Bobby Cox.   But I’ve still been privileged enough to have watched many a Braves icon do their thing at Turner Field, like the aforementioned Bobby Cox, leaning on the guard rail saying “C’mon (nickname of a Braves player)-y” as they ran down to first base, or whenever he earned one of his all-time record manager ejections.

Or the nights when I witnessed John Smoltz strike out his 3,000th batter, Felipe Lopez of the Washington Nationals, during a game in which the game was halted to memorialize the occasion, before the Braves would ultimately lose the game.   I was at the game where Chipper Jones hit his 400th career home run, against the Marlins, a team he had victimized throughout his entire career.  I’ve been to many games in which I’ve seen careers winding down like greats like Billy Wagner and Julio Franco, and as is often times the case with the Braves, in defeat.

I’ve also been privy to have seen the rise of talent while watching games at Turner Field.  Regardless of how their careers have gone in later years, there was unmistakable excitement in watching the rises of guys like Jeff Francoeur, Brian McCann, Jason Heyward, and Craig Kimbrel.  Even now, with the Braves sucking and Heyward on another team, I still consider Jason Heyward’s debut and the home run he hit off of Carlos Zambrano one of the greatest sports moments I’ve witnessed in person.

One thing I’ve said that I always wanted to witness, was a no-hitter; it goes without saying that I had hoped it would have been a Brave who threw one.  Well, I did see my no-hitter back in 2010, but it came at the expense of the Braves, when Ubaldo Jimenez, then pitching for the Colorado Rockies, shut down a lineup that had scored a boatload of runs in just the series prior.  But seeing failures by the Braves became something of a way of life for me, and once I stopped being so dictated by wins and losses.

I didn’t really start going to a ton of baseball games until 2006, when the Braves’ sustained success came to a crashing halt.  I watched a season come to a close where the Braves were not in the playoffs, and had to find solace in playing spoiler to teams that were competing for playoff contention.  2008 was a particularly bad year, in which the Braves lost 90 games, which compared to the last two seasons, doesn’t seem so bad.

Despite a fairly exciting run in in the tail end of 2009, it wouldn’t be until 2010 that the Braves would see the postseason again.  I didn’t go to any playoff games, because I was cash poor and didn’t want to deal with the customary Turner Field price gouging.  I can’t say I was in attendance when Bobby Cox made the last poor choice of his career, leaving Derek Lowe in to pitch against a resilient San Francisco Giants team that would win the game, and ultimately the World Series, but it was at home where a Hall of Fame managerial career came to an end.

By this point, my interest in baseball began to wane a little bit, as the priorities in my life began shifting, compounded with the revival of the Braves, leading to higher prices, Draconian ballpark policies, and more obnoxious crowds.  The number of games I began attending began dropping, and I was getting to the point where I realized that baseball games were losing their point without good, or any company to enjoy them with.

I’m getting off track here.  Basically, I’m taking time out of my oddly hectic schedule to go to Turner Field one last time, before the Braves take a great white flight up to Marietta into a ballpark that I already loathe.  Turner Field is where I’ve seen a lot of good baseball, a lot more bad baseball, but it’s a place that I’ll always remember fondly as a place where I came to truly love the game.

Also, they’re giving out bobbleheads.  “Heads” as in plural, because the Braves have been so bad all season that two prior bobblehead nights have clearly been unable to draw 20,000 people, so they’re doubling up on the remainders to give out on my night.  A promotion birthed from the failures of two others; with a smirk, I can’t say that the Braves shouldn’t have it any other way.

Without question, there will be a little melancholy feeling walking around the concourses one last time, and I plan on bringing my camera and taking some pictures of and with the house that Chipper Jones built.  Maybe, just maybe, the Braves might actually win a game for me on the way out, but honestly, I’m not going to be upset if they don’t.