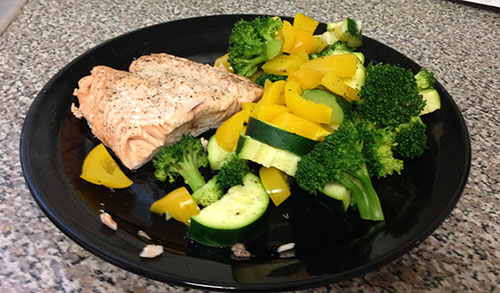 Looking through some pictures over the last year or so, I’m feeling an increasing resentment at how I’m looking in them.  Simply put, I feel like I’m looking a little more rotund than I’m typically comfortable with; and I can’t help but wonder if this is age catching up with me, or if I’ve just been letting myself let my guard down with general eating rules, or perhaps it’s a combination of both.

I’m not working out any less than I used to, and I still do a variety of weight training and cardio, and as long as I go to work, I’m also going to the gym, typically five days a week.  I’ve probably just gotten too lax with food, choosing poorly when it comes to what I’m eating, and probably eating a little too much of it, because food is awesome.

But I’m also 34 and not 24, when I shed a lot of weight, with a pretty strict diet, so I guess I should probably start watching what I’m eating again, and hope that some of the unsightly flesh on my body goes away in a few months.

Dieting isn’t really that hard to me, since it’s basically just conditioning, but getting to that point where eating choices and habits become normalized that’s somewhat aggravating to the point where it’s brog-worthy.

I’ve been eating pretty clean for a little bit now, and more importantly, I’m eating less, and I’ve been stopping eating when I am legitimately full, and not when the plate is empty.  But I’m finding myself still often hungry, and it sucks when I wake up in the morning with my stomach really jonesing for some breakfast, or when I go to the gym already hungry, and expect to have a productive workout.

The one thing that I’m doing differently now is that I’m experimenting with steam cooking.  Fried food is delicious, but even the healthiest vegetables lose most of their healthy status when fried in a pan.  Baking food is a healthier alterative, but there’s no denying that oven-cooking is time consuming and requires a lot of prep and pre-heating before anything can actually be cooked.

But steam cooking?  It’s about as easy as can be, especially with a microwave steamer.  A half cup of water, five minutes give or take, and anything from chicken, fish to vegetables comes out soft, tender, fully cooked, and without a single drop of oil.  Sure, the food is almost always entirely on the bland side of the spectrum, but it’s nothing that a few light pinches of salt, or other seasoning can’t rectify.

I’ve made a couple of meals with the steamer, and I have to say it’s been a delight, simply salt and peppering a chunk of salmon, throwing it in the microwave for five minutes, where it comes out moist and fully cooked, before throwing in the second steamer full of greens, which also comes out soft and tender, and I have a full plate of steam-cooked goodness, that fills my stomach without being nearly as guilt-inducing.

Clearly, exercise alone at this point in my life isn’t going to cut it, so I’m hoping that changing my diet to some more sensible choices revolving around steam cooking will be beneficial to my renewed sense of not wanting to look like such a fat hideous fuck anymore.