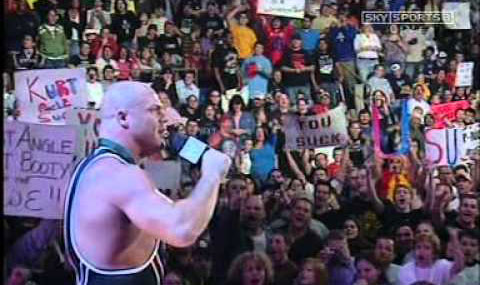 What other shitty things can they do: Cobb County to evict and demolish anywhere from 15~30 existing homes in order to create a four-lane road to help alleviate traffic, namely that will be caused by the arrival of the Atlanta Braves

In the late 90s, Kurt Angle arrived in the WWF.  Back then, nobody really knew what was going to happen when he showed up on television, and it was clear that creative had a general idea, but they had to see how the fans would react before they could really move forward.  So Angle came out, started winning his matches, celebrating a little on the excessive side, and started cutting promos about his “three I’s.”  As hoped, the fans soured on his character, and Kurt Angle headed down the path of becoming an insufferable heel.

However, in spite of the fact that he had successfully drawn the ire of the fans, and was on the heel end of the spectrum, his character was obnoxiously square, acting like he was the best guy on the planet, and insisted that he was a respectable, admirable, wholesome wrestler that everyone’s kids should look up to.

That’s basically what the Atlanta Braves are now, with the help of the greedy bureaucrats that run Cobb County acting like Creative, to help churn this heel of an organization along, while they act like they’ve done nothing wrong.  They’re Kurt Angle.

The Braves have swindled the county into thinking they need a ballpark, they swindled the taxpayers by conducting all business and announcing at the eleventh hour so that any and all opposition would have zero time or even capability to competently try and defend against the decision, and along the way, they’ve swindled numerous businesses, entities and companies into getting whatever they want without having to put forth any of their own millions and millions of dollars.

And now, they’re actively physically removing people from their homes, and forcing them to relocate, so they can have land to lay down some worthless asphalt.  There is absolutely no way in which this can be looked at where this is not a shitty thing being done.

There is concern over traffic; this was obvious from the nanosecond this idea even came into conception.  Doesn’t matter, build the park, deal with it later.  Later is approaching and there is still a concern over traffic.  Piss off Sandy Springs, Fulton County, residents all across Marietta and Cobb County, doesn’t matter.  We need more land, but all the land is taken, by, people, who live in homes, trying to live the American Dream as best as they can.

Doesn’t matter.  Through some legal loophole that few people probably bother to learn, they find land that can be seized via eminent domain, legally forcing people to forfeit their property and go find somewhere else to live.  15-30ish homes doesn’t sound like a tremendous amount of households to displace, but that’s a lot of people who were probably hoping to not have to relocate for any time soon, now having to relocate sometime soon, because Cobb County wants their land to build roads, so that the Braves-related traffic will be just shitty, instead of extremely shitty.

And that’s just that, they want the land for roads.  Not like something essential, like a medical facility, or even a grocery store in a food desert.  The land is wanted, so that homes where some people might actually have roots, can have their homes forcibly taken from them, torn down, flattened and have asphalt poured onto them, so that a bunch of people can drive on them to go see a shitty baseball team that is always looking at tomorrow and repeatedly forgetting about today, lose another 90+ games in 2017 and on.

But going back to the Kurt Angle analogy, in spite of all the shitty things that the Braves and Cobb County are doing that are enraging people like me, and presumably the large part of Cobb County that doesn’t like baseball and didn’t want the Braves in the first place, the Braves are constantly playing ambivalence and acting like they’ve been doing nothing wrong.  Instead, like Kurt Angle, they’re spouting rhetoric about how optimistic and how great life is going to be in Cobb County once they start playing games at ScumTrust Park, while the people in the stands are booing and holding up big signs that says “YOU SUCK” on them.

The bottom line is that the Braves have done or taken part, in a lot of really shitty things up to this point, but the fact that they’re now partially responsible for people losing their homes, crosses a line and sinks to a new low of just how shitty the idea of the Cobb Braves is really becoming.  Evicting people so that more roads can be built is pretty much a slap in the face to the idea that Metro Atlanta will never be a world class city until it has reliable transit and fewer roads.