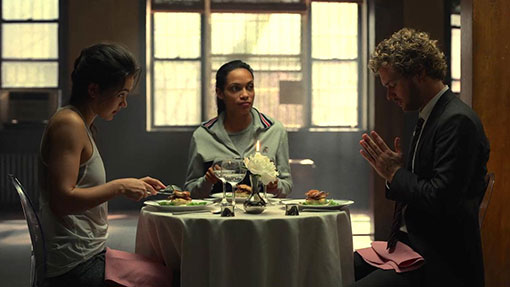 For the first time in a while, I had a weekend where I had really nothing planned at all, so I made the best of it by pretty much doing absolutely nothing at all.  Meaning, I took the opportunity to sit around and watch a bunch of television and movies that I’d been putting off for a while.

I’ve made it pretty clear that I’ve been pretty fond of Netflix’s Marvel catalogue, and throughout the last year, I’ve watched and enjoyed both seasons of Daredevil, Jessica Jones and Luke Cage.  The objective for the choices of properties are obviously setting up an eventual run for The Defenders, but in order to get all the players onto the field, it was also obvious that Netflix would have to create and release a series about Iron Fist.

There was one obstacle that everyone including myself was a little dubious about the latter needing a series to be made about, and that’s simply the fact that among the Marvel Comics roster of characters, Iron Fist is pretty much a fucking lame property.

Such isn’t solely my own opinion, it’s often a very broadly accepted one.  Numerous writers have tried to varying degrees of failure, but the bottom line is that Iron Fist is a really, really weak property for Marvel Comics.  Almost completely incapable of carrying a series, about himself, Iron Fist found the most success when paired with other, stronger characters, in a complementary role, like Luke Cage

Eventually, Luke Cage was getting bogged down by Iron Fist so much, they eventually had to integrate more characters to rescue the escalating weight of Iron Fist, so The Defenders were brought together.  And when only 25% of the formula is crap, 75% is still a passing grade, and that’s why The Defenders are perceived as something of a cool tandem of characters.

Needless to say, despite the fact that Netflix had done a pretty great job of how they’ve handled their current line up of Marvel properties, it was perceived to be a pretty lofty goal to do anything remotely interesting with Iron Fist.

And yet, despite a bar set low enough to not be able to trip over, Iron Fist was still ripped to shreds according to scuttlebutt.  People on Facebook were posting about how much it sucked.  Or they were linking to other people, or websites that wrote about how much it sucked.  Claims of whitewashing were thrown around which were bullshit and those flinging those stones were full of shit because Iron Fist was supposed to be white, but their posts still started an unfortunate snowball of bullshit rolling towards the straw man of whitewashing.

Even my own friends said Iron Fist was crap, and that I could probably just not watch it and still enjoy The Defenders when it eventually comes out.  In fact, it was such a conversation with said friends that made me realize that I hadn’t seen Iron Fist yet, and that I should actually probably watch it, contrary to the suggestions that I didn’t.  I can’t help it, I’m a completionist, and since I’d already watched all the other shows in the Netflix Marvel Universe, I absolutely had to watch Iron Fist, despite my very own extremely low expectations.

So, I binge-watched the entire 13 episode series in three days, and honestly?  It wasn’t terrible.  I didn’t think it was that bad at all.  In fact, I would say that Netflix should get a fucking award for taking a shitty property like Iron Fist and making it remotely watchable.  I started watching expecting to be put to sleep, or that I would eventually devolve to playing League of Legends while I watched, but after I finished the second episode, I actually had to rationalize myself to stop and go to sleep so I didn’t jack up my sleep schedule, but the fact was that I wanted to keep watching.

And throughout the weekend, I watched the rest of the series, and found it completely watchable.  Finn Jones was way younger than I would have imagined an Iron Fist should probably be portrayed at, but it made him easier to connect to than the comic version of Danny Rand that was pretty much a completely righteous square tool.  I couldn’t decide on if I thought Jessica Henwick was hot or not as Colleen Wing, but I each time I watch a Netflix Marvel show, I kind of fall in love with Rosario Dawson all over again whenever she shows back up in yet another property as Claire Temple, the glue that will ultimately bring The Defenders together.

Make no mistake, Iron Fist’s story is easily the weakest of them all.  The characters are all fairly weak, the plot is pretty predictable, and it’s a pretty straightforward line to how things will transpire.  More than any of the other Netflix Marvel shows, Iron Fist spends more time setting up the eventual Defenders than dealing with its own storyline, mostly because the Iron Fist story is about as thick as tissue, and is nowhere near as interesting as what will probably eventually be the conflict that the Defenders collectively will have to deal with.

But as a whole, I found 13 episodes that weren’t terrible, had decent flow, and just enough references and nods to the other, more interesting Defenders, to keep it moving along fairly smoothly towards a resolved conflict, and set the series up for the Defenders collectively, and less Iron Fist on his own.

Iron Fist was hardly the steaming pile of shit that so many people had written it off as, and is a perfectly good example of why I take reviews and the opinions of others with a grain of salt sometimes.  It’s decidedly the weakest show among the four Defenders, make no mistake about that, but as far as television goes, I’ve seen way, way, way worse television than Iron Fist.

Take FX’s Taboo, for example.  God damn was that a fucking miserable, overly British piece of shit show.  I feel like I’ve wasted eight hours of my life going through the series, and it legitimately makes me mad thinking about the time I’ll never get back slogging through such a terrible story.  I know everyone loves Tom Hardy because of Mad Max, but I was not impressed with Fury Road, and not being impressed with Taboo just makes me think Tom Hardy himself is as overrated as the things he acts in.