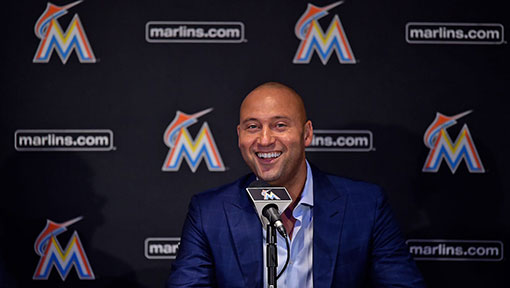 There were owners like George Steinbrenner and Ted Turner who actually liked baseball, were passionate about it, and were not even remotely shy about unloading boatloads of money towards free agents and top-tier talent in order to improve their chances to win championships.  Then there are owners like the other 80% of MLB clubs that are either investment groups, corporations or wealthy individuals who simply are content to operate within an arbitrary set of rules and agreements amongst each other, and see baseball as a business and not a children’s game.

And then there’s Jeffrey Loria, who lucked into a baseball franchise and has been using the squad as his own personal ATM, pocketing revenue-sharing checks annually, while repeatedly stripping down rosters and payroll in order to keep more money for himself at the expense of genuinely competing.  And despite his best efforts, his organization continues to farm decent talent and field fairly competitive squads, that most of the time are a little bit of shits given away from being potential contenders.

In fact, it’s pretty astounding to imagine that the story of the Marlins under Jeffrey Loria is a guy who bought the team for $150 million dollars once upon a time, stripped down the roster to where the entire team’s payroll didn’t equal Chan Ho Park’s annual salary, lied and swindled the city of Miami into building him a new stadium, lied and swindled a bunch of free agents to play in said new stadium before trading them and their contracts away, and is on the cusp of selling the franchise for nearly ten times what he paid.  It’s the epitome of getting rewarded for bad behavior, and if I didn’t love baseball so much, I’d fucking hate baseball that crooked ownership can profit like this for really doing nothing at all.

But with Derek Jeter, we have a scenario that at least I’ve never seen before, and I don’t feel like doing the research to find out, but if a hall of fame former player has ever owned a team before.  Being an actual baseball guy, and one that isn’t that far removed from his playing days, would be an interesting litmus to see how they operate once they have full autonomy and decision-making power of an entire organization.

Would Yeah Jeets tap into that competitive player’s mindset where he would want to win no matter what?  Undoubtedly at various points of his career, he looked over at left field or the bullpen, and wished for not Raul Ibanez or Scott Proctor to be there, but as a player, you can’t really make those personnel changes; but as an owner, Yeah Jeets most certainly would have the power to pluck undesirable players off his roster and replace them with whomever he feels would be better suited.

Or, would Yeah Jeets fall into the camp of “I’m part of a group, and our group is here because baseball is a business” and become some stuffy figurehead of a company that wants to operate the Marlins safely and vanilla, and make as maximum profits as possible with as little risk incurred.  A set payroll, micromanagement, and strict guidelines of player behavior, would the Marlins basically become a national league Yankees-like corporation in Miami?

I think the expectation would be that Jeter takes over the Marlins as the competitive player, who will make all the right choices and decisions, because he played the game and succeeded at the game, so he knows exactly what moves need to be made to shape the Marlins into a squad that can win at everything as he once did.

Regardless of what happens, I think it’s good for baseball that the Marlins are taken away from Jeffrey Loria, even if is going to be making out like a proverbial bandit, but it’s honestly hard to imagine that anyone could actually be worse than he was.  A guy like Derek Jeter is pretty much the polar opposite of Jeffrey Loria, and it will be interesting to see what will happen to the Marlins with opposite of Loria at the helm of the squad.