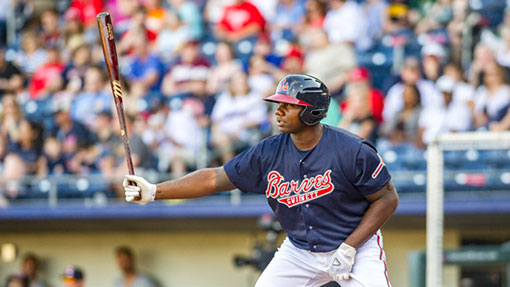 A little bit of backstory: the Atlanta Braves are one of the few organizations in baseball that owns the majority of their minor league affiliates.  It’s why all the teams they own are called “Braves;” the Danville Braves, Rome Braves, Mississippi Braves and Gwinnett Braves.  At one point, they stressed the importance of naming all their teams Braves, so that they could really reinforce brand awareness and strengthen their identity to all parts of the Southeast in which they resided in.

This was a stark difference to the vast majority of the rest of Minor League Baseball, who had team names that were often more whimsical and often identifiable to their specific towns/regions, like the Montgomery Biscuits, Modesto Nuts, Las Vegas 51s, Buffalo Bisons and Jacksonville Jumbo Shrimp just to name a few.  It was almost a rite of passage for young players to work their way up the ranks, through teams with less than prestigious names, before they had the chances to hope to play for one of the 30 Major League Baseball franchises.

Personally, I’ve always felt the Braves were an organization of squares, to name all their minor league franchises Braves, in such a calculated and serious-business manner.  Like their 18-year old rookies in Danville might be able to close their eyes and imagine that they’re in a 35,000 attendance ballpark in Atlanta and suddenly translate playing like a major leaguer in their rinky-dink park that maybe 35 people are actually at.  Or that their fans will automatically love the Atlanta Braves solely because their favorite players in Jackson, Mississippi were ultimately traded to the White Sox or Diamondbacks.

Anyway, what prompted this post was this news that I saw that the Gwinnett Braves are taking suggestions for new names for them to use in starting in 2018.  The Atlanta Braves are finally opening up to the idea of naming one of their Jesus affiliates something other than “the Braves.”

My knee-jerk reaction was kind of like a lion jumping into a herd of gazelle, but being so excited and overwhelmed, it can’t zone in on a single target, runs around in a frenzy, all the gazelle get away, and the lion ends up hungry and disappointed.  I wanted to come up with a laundry list of sarcastic and snarky suggestions for what the future Gwinnett Braves should be named, but I’m actually having a hard time coming up with any good zingers.

Taking a page out of disgruntled Gwinnett residents, who are on the hook for the stadium whether or not they wanted in the first place, names like Gwinnett Tax Burdens was a good one I saw in the comments of the aforementioned link.  And as succinct as it is in tone and intent, it lacks any alliteration or finesse.

Going the route of trying to use a name for what Gwinnett is known for, I came up with Gwinnett Gridlock, because there’s no denying the fact that where Coolray Field, their ballpark, is located, is at the northern split where I-85 divides from I-985, and is often times a point where there is massive gridlock, both north and south.  Sure, it connotes negatively with the frustrating traffic that the county is notorious for, but if sourcing from the area is a common place to derive names from, the Gwinnett Gridlock isn’t bad.

But then in the article, one of the reasons for the name change was cited that it was potentially confusing for Braves fans that a minor league team would be so close to the parent team:

“Fast forward nine years later, we’re in our ninth season, and our reality is a lot of confusion in the market with which team is which. It’s moreso for us. … We’ve had folks, on multiple occasions, who had tickets for a Gwinnett Braves game and showed up at Turner Field. Folks have turned up at Turner Field for a fireworks show and it turned out it was our fireworks show night. It’s more to clean up confusion on the marketing side, mostly from our end.”

The brass cites that people have actually managed to mistake Gwinnett Braves tickets for Atlanta Braves tickets and vice-versa.  Now I don’t deny that such may have happened once or twice in the nine-year history of the organization, but not to the frequency to warrant an organizational name change.  But such a story in itself, made me think that perhaps the team should be called the Gwinnett GEDs, since the Braves seems to think their fans are complete and utter morons.  This would also be a great opportunity for the GEDs to pair up with a local educational testing service where the stupid fans could get their GEDs to hopefully prevent mistaking Lawrencevile from Atlanta and vice versa.

And speaking of Lawrenceville, the actual town in which the Gwinnett Braves play in, with Gwinnett being just the county that the team is named after, why not think a little bit outside the box and use ol’ L-ville to derive a name from?  And considering the Braves value very little the AAA-level, preferring to hoard prime prospective talent in A-ball or AA-ball, stashing reserve players, washed up has-beens and rehabbing players in Gwinnett, needless to say, they lose a lot.  The Lawrenceville Losers.  Or perhaps just the Lawrenceville L’s, so that it’s not as obvious to those without GEDs that we’re talking about losers losing.

Ironically, this isn’t really that big of a revelation, to anyone who kind of follows baseball.  The Braves might own the most of their affiliates, but they’re far from the only organization that owns at least one.  And amongst most that do, and at one point did have their affiliates named after the parent club, and changed it, they’ve never been to magnitude of change that would really be groundbreaking or revolutionary.  That’s why you get shit like the Reading Phillies turning into the Reading FightinPhils and other similar garbage.

Ultimately, the whole basis for this whole name change stems from one thing, and one thing only:

The G-Braves apparel will disappear from the team store as well, replaced by hats, shirts and other items with the new team name. That change will offer a nice initial spike in sales of team gear, but Johnson stressed that had nothing to do with the name change. However, it is a nice bonus with the switch.

If anyone thought this whole transition was anything other than a grab for potential money, then they’re out of their mind.  To no surprise, Gwinnett Braves merchandise probably doesn’t sell well.  Why should it?  Aside from being completely sterile, uncreative and unappealing, most people who live in Lawrenceville and Gwinnett county who like baseball all probably Braves stuff – Atlanta Braves stuff.  Why would they need more shit that says “Braves” on it?

By changing the name and changing the identity, they’re basically creating more potential to move merch, plain and simple.  And considering how disillusioned people like me, and I’d guess many other Braves fans are getting, I think distancing themselves from the Braves name might not be a terrible idea, considering just about every single ballpark in the Braves organization was built in the exact same manner: swindling local tax payers by buying out bureaucrats, and leaving everyone on the hook except themselves while they can pocket all the checks.

And that modus operandi, should really be the name of the future team: The Gwinnett Barves.