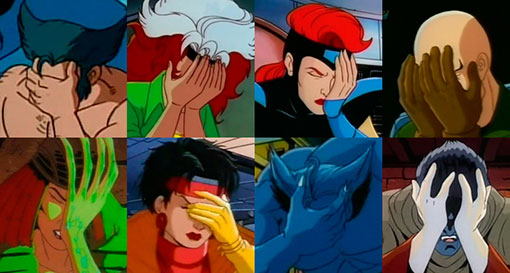 I’ll be the first to admit that I’m a long way from the days when I used to really, really follow comic books.  When I’m bored at the desk, I’ll often times wander over to Wikipedia and catch up on how absurd comic storylines are getting, and more often than not, I’m disappointed in the direction of where things have gone throughout the years.  The separation of Peter Parker and Mary Jane Watson.  The killing of the Joker.  The killing of Batman.  Jubilee as a vampire.

Needless to say, there aren’t any storylines that are making it remotely compelling to start seeking out comic books these days, and there’s pretty much nothing I can’t use Wikipedia or the rest of the internet to catch back up with.  Television and movies might be bringing a ton of attention to the parent properties, but there’s so much of it, that that’s all that I think people wait for exclusively.

But if there’s one current storyline that I think will be safe from adaptation, it’s this one that I saw recently pop up on a social media discussion: a Hulk-Wolverine Hybrid character.

Why?  Because it sounds absolutely stupid as shit.

A combination of the Incredible Hulk, with gigantic mass, super strength, invulnerability and green skin, with Wolverine, with heightened senses, a healing factor which is irrelevant if they’re already invulnerable, and of course, the adamantium-coated skeleton, giving him razor sharp claws.

Let’s just take two of the most iconic, overpowered heroes in the franchise’s history, and just mash them up.  It’s like mashing up Elvis Presley with Michael Jackson.  Hulk Hogan with John Cena.  A Stingray Corvette and a Mustang Cobra.

Things that don’t really make sense to combine, being combined anyway.  Out of morbid curiosity, I’d like to see what writers do to write themselves out of this concept, and I’d like to know what came first, the concept or the writing?  I feel like it’s going to need some really creative writing to ret-con and whip shit up on the fly to create any sort of coherent storyline out of this combination.  They’ll need a combination of Mortal Kombat storyline wrters along with WCW’s 2001 writing staff to gain those attributes.

No seriously, who thought this could possibly be a good idea?  Jumping the shark doesn’t describe how absurd this sounds.  DJ Tanner Wrestling isn’t even sufficient at describing how dumb this sounds.

Wolverine will forever be entwined in the history of the Hulk, since his first appearance happened in the Hulk franchise, but there’s little reason that they should ever really mix up on a regular basis, much less be combined.  I can’t say that I’m going to bother going out to find out how this storyline transpires, but I can say that in about a year or so when I occasionally gloss back to things I’ve written in the past, I’ll come across this post, and think “ooh, I bet it’s summarized on Wikipedia!” and then go check out of morbid curiosity. [2020 note: it was, and it was fucking terrible]

I’ll see pictures of a giant green Canadian with bad hair and oversized fists, with three tiny adamantium chopsticks sticking out of his knuckles, because I’d really like to see Marvel try to rationalize the expansion of the skeleton when Hulking out.  I will cringe harder than a slug getting salt sprinkled on it, and I will undoubtedly laugh ironically.

I also bet that somewhere in this bastardized character’s history, Tony Stark and/or Mister Fantastic will have to be involved, since they’re so absurdly overpowered combined.  Ulk and Ulverine will also be unleashed as anti-heroes needed to stop a power-hungry turned bad Hulkerine, and in the end, he’ll be captured and banished to The Negative Zone, which is Marvel’s convenient exile for problematic characters, both canonically and metaphorically.

Either way, I’d wager money that this idea is one that will be regretted, frowned down upon, and make even Stan Lee chuckle maniacally at the sad bastardization of his original ideas.