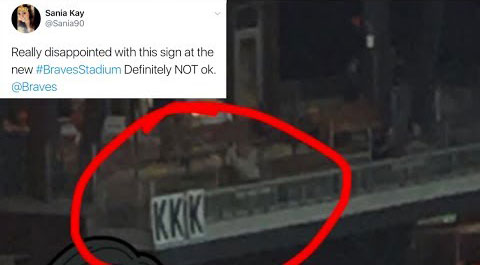 A little bit of research goes a long way: girl looking for something to bitch about on Twitter is triggered by seeing the strikeout counter at a Braves game on television reading “KKK”, immediately voices her outrage in 140 characters or less and is ridiculed for not knowing a standard ballpark tradition

See, this is exactly what happens when people actively seek out things to pretend like they’re offended by, so they can sound like social justice avengers on the internet.  And what happens when you don’t double-check your words or do a little cursory research to see if maybe, somewhere on the internet, the answer to your outrage, might actually exist.

I love the text delivery of

With the all-caps NOT and the stern looking period after ok.  I know it’s hard to interpret emotion out of text, but I can only imagine the artificial and determined offense taken by this twerp who had admit to being bored and basically decided to let herself get triggered to help pass the time.

K-counters have only been at like every Major League baseball park for nearly four decades, but who needs to look things up when it’s clearly adequately offensive enough to blab about over the internet??

Really though, I should be thankful for idiots like this existing, it gives me things to write about.

And in all fairness, this wouldn’t have been a problem if the Braves actually had a pitcher that was really good, and actually struck guys out.  Had the Braves had one of those, maybe this idiot chica might’ve averted her eyes to a screen that said KKKKKKKK instead of the Ku Klux Klan?

But where would the fun have been in that?