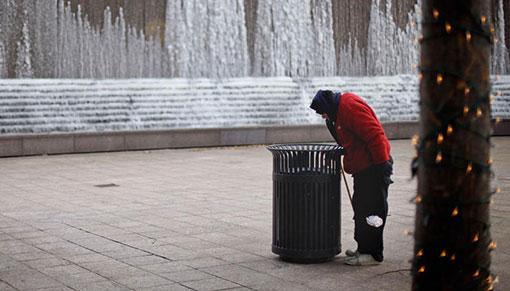 Despite my general disdain for it, I have the unfortunate circumstance to have to drive by Racist ScumTrust Park every now and then.  It’s inevitable, because of where I used to live, highway access or the need to pass becomes somewhat of a necessity from time to time.

Over several of my last few times passing by the ballpark, I noticed something that I had never really noticed in Smyrna/Vinings before: homeless people.  Homeless people wandering the sidewalks near, but not directly on the premises of the hallowed BATtery ATLanta grounds, but doing the usual homeless things; digging through trash cans, camping on park benches, and overall creating the uncomfortable stigmas that their presence tends to do.

That being said, it’s hilarious to me to make the asinine assumption that the homeless people came with the ballpark, because if there’s one thing that I’ve noticed about ballparks throughout all of my ballpark travels is that there’s often times homeless people around them.  Sometimes it has to do with the fact that ballparks are often located in the hearts of cities, and homeless people dwell in the hearts of cities, and sometimes it’s because cities are named Detroit or Oakland or Miami, and the lines that separate bums from citizens is a really blurry one and it’s easy to make that mistake.

Make no mistake, the arrival of a ballpark, even in jonquil Smyrna, is no exception to the rule of homeless accompaniment.  It’s like ivy or kudzu plants, when one tries to take a clipping of a shrub or an existing plant with hopes of growing them in another location; no matter how much they look like they’re devoid of any pest stowaway plants, they somehow manage to tag along in some way, shape or fashion.

Homeless people are kind of like that, it seems.  I bet something was repurposed from Turner Field brought into Racist Park, and despite their supposed thorough inspections to make sure that no homeless people were clinging or hiding on them, or in dormant seed form, once plopped into Smryna, they sprawled outside of the new place, taking residence in their new digs, rooting through trash cans off of Cobb Parkway and Cumberland Boulevard.

I bet it was the Chick Fil-A cow statue that they hitched a free ride onto.  From the ghettos of Mechanicsville to the suburbs, it’ll be like that episode of the Simpsons where Bart inadvertently smuggles a frog into Australia and they multiply and end up ravaging the ecosystem.  Build a ballpark, and the bums will follow, because ballparks and bums go together like peas and carrots.