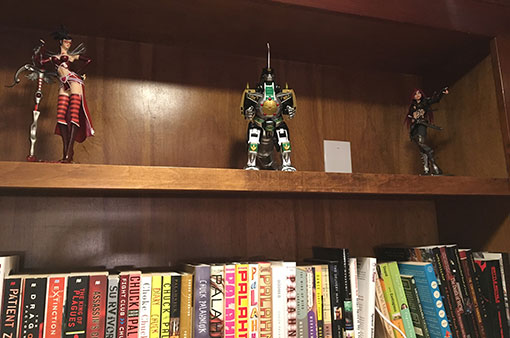 When I was in the fifth grade, I was a huge Mighty Morphin Power Rangers fan.  This was one of those things that publicly amongst my school peers, I kept under wraps because that shit was for kid-kids, i.e., the ones in the third grade or younger.  Yet I was still captured by the campy acting, bad voiceovers and the fight footage more sliced and spliced together than a Kardashian.

I even learned how to program my VCR timer because of Power Rangers, because the show always came on at 2:30 when I didn’t get home from school until like 3:45.  That’s how much I grew to love Power Rangers, that I forced myself to learn things in order to enjoy a mindless and stupid kids show.

That particular winter, when Power Rangers really began merchandising, I decided that I really wanted a MegaZord and/or a DragonZord.  I wasn’t necessarily a Transformers or Voltron fan, but I loved the Transformers/Voltron-like manner in which the Zords transformed and connected together, and I really, really, really wanted some Zord toys of my own.

Unfortunately, this winter was the winter when Power Rangers toys were the hot item for the holiday season.  The equivalent of Tickle Me Elmo, Furbies, hoverboards, NES Classics, or whatever that one thing is during each holiday season in which there aren’t ever enough of, and the demand becomes so great, it achieves a modicum of mainstream attention at just how hard it is to get them, perpetuating the cycle of unavailability to the next level.

Yeah in 1995, that was Power Rangers toys were that hot item, and in lieu of the Today Show, Ellen or the rest of the internet to glamorize how hard it was to get them, the local news and the Washington Post did their best to identify the scarcity and demand for Power Rangers toys enough to where I could never get one.

I remember that winter vividly too, visiting every single toy store in the area, praying to god that I’d luck into that momentary window where one of them just might be stocking the supposed 1-2 they’d get in at a time.  Toys ‘R Us, KB Toys, K&K Toys, Kiddie City Toys, I went to all of them, trying to see if I’d be lucky enough to score either of the Zords.

But nope, didn’t happen.  I look back at that Christmas, compared to many of the other Christmases while growing up, and that was one of the years in which I feel like I didn’t get the one thing I really wanted.  My folks were pretty good at delivering on the things that I wanted otherwise, which is a luxury not lost on me.

Anyway, fast forward to more internet-centric times.  A few years ago, I had one of those moments, where it dawned on me that we lived in a connected time where I could just look up things from my past, to see if there was any nostalgic availability to them in the present.  I started looking up old Power Rangers toys on eBay, only to discover that the only hits were hardcore collectors from the 90s who sat on MMPR Zord toys for decades, and were now trying to flip them for 2-3 times the original cost, which back in 1995 was still $100ish.  Needless to say I was astonished but not at all surprised at the difficulty in getting them, and even over a decade later, I would be let down at the failure to secure, Power Rangers toys.

An even shorter time ago, MMPR toys were released as some sort of legacy or 20 year anniversary of the show, and suddenly the toys of 1995 were available again.  This excited the kid in me that will never grow up, and amidst occasional errands ran at places like Target, or whenever I’d have reason to go into a Toys ‘R Us, I’d peruse the toys aisles, only to see gaps in the shelves, and a designated space where MegaZord was, but was sold out again, as if it were 1995 all over again.  Sure, there would be shit from Ninja Rangers, Power Rangers in Space, Power Rescue Rangers or whatever the fuck all the later shows were called, but all the MMPR stuff would be gone like I was in the fifth grade all over again.

Eventually, the nostalgia train went back to the station, and I forgot about wanting Zord toys all over again.  That is, until this past weekend, when my friends and I went into the mall for the first time in like forever, and came to the realization that ThinkGeek stores were a thing now.  And that they just so happened to have DragonZord toys.  Three of them.  THREE fucking boxes of DragonZord toys.  This was literally mind-blowing to me, to see three in stock, much less one.

I hemmed and hawed for like ten minutes, but to nobody’s surprise I caved in and bought one.  It’s literally been nearly 25 years overdue, but I finally got one of the toys that I had longingly pined for when I was in the fifth grade.  And with some shelves that I had a lot of space on in my new home, I knew just where DragonZord was going to live as soon I got it home.

This is what happens when kids that never grow up start making adult money.  You better believe your ass if I ever come across a MegaZord, this post will most definitely have a sequel.