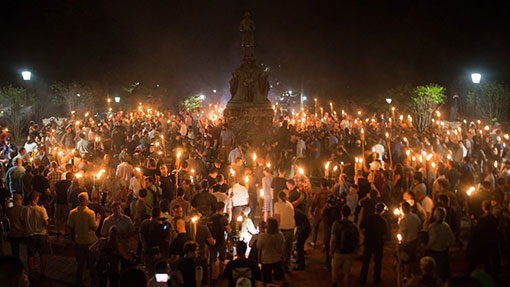 It’s not often I want to go back to a major topical event, but admittedly, I’m having a hard time letting this one go.  It’s on the tongue of every news outlet, and even in the endlessly flowing stream of social media, it’s still a hot topic that is still the talk of the town.  But the emergence of blatant white supremacy, the supposed neo-Nazis, and just plain eruption of bigotry that took America by storm in of all places, Charlottesville, Virginia has been a pretty big story, with some everlasting repercussions and impressions, whether people other than myself want to admit to it or not.

Originally, I assumed it was mostly populated by the degenerate hill tribes of Virginia where the KKK is known to still be around, but it turns out that it was slightly more organized, and comprised of people from all around America.  Why Charlottesville was chosen as their point of conglomeration was a small question I had, but given the obvious answer that such a demonstration would never have been able to fly in Northern Virginia, where they’d have been eaten alive by the vast mixing bowl of the region, with the same sentiment being similar in the Commonwealth’s capital of Richmond.

My friends and I have laughed about how this would only have ended in tragic-ironic gun violence if it happened in the next largest populace of the Virginia Beach-Tidewater region, which has very large black communities with many notorious gang issues, whom would probably love to band together to oppose a bunch of white supremacists, so it pretty much left Charlottesville, home to the University of Virginia as the only logical place to gather and blather on about white-this and white-that and all their stupid shit that they somehow think is remotely acceptable in 2017.

I can’t get over the irony in that Charlottesville is the place where I learned Korean, a language not belonging to whitey, is also a place where large numbers of angry white bigots gathered to light tiki torches and chant about their supposed dying culture.  Obviously, it’s not so much a reflection of Charlottesville itself, as much as it is the unfortunate choice of gathering of a bunch of racists, but that’s how history works; Charlottesville is a site where hatred gathered, boiled over, and became national news.

I could go on about more ironies and tragedies about the whole situation, but they’d be nothing anyone hasn’t read or heard on any other news outlet, real or allegedly fake.  What made me feel like writing is something more of an internal result that has been seeded, on account of the things I’ve witnessed happening in Charlottesville.

I don’t really feel like I trust white people anymore.

Granted, I have tremendous trust issues to begin with, and I can’t really say that I trusted white people that much to begin with.  But I also didn’t trust black people, Hispanic people, other Asian people, and especially my fellow Koreans, whom I felt were some of the worst perpetrators of farming false trust to take advantage of, especially towards other Koreans, preferably of the older generations.

But the brazen actions of a large group of white people in Charlottesville now kind of makes me look at all other white people in a different light these days.  Primarily on account of how fearlessly they marched, protested and acted on violent tendencies, without remotely feeling the need to protect their identities or hide their faces.  This is who they are, not caring if everyone on site or with cameras and recording video could see their faces.

Sure, lots of these unmasked white folks are facing the wrath of the internet, getting doxed and exposed here and there, which is a whole other argument in itself, but none of it really changes the fact that these bigots are completely unconcerned about other people knowing that they are not a fan of those people around them that are not white like them.

What this does to me is it now puts just about all white people I don’t know in a light of question: are they potentially white supremacists as well?  It might be a little unfair sure, but the thing is the events in Charlottesville sort of validate a lot of those concerns.  Based on how fast some of these guys have been identified, these are all people who are from communities that have some semblance of minority communities in them.  People are looking at their faces, and some are recognizing them, and are probably pretty surprised to see them at white supremacy rallies.  Maybe they don’t care who knows that this is how they feel, or perhaps they really are that stupid?

The thing is, I can’t help but feel like, in spite of how large these white supremacist Nazi shithead groups were in Charlottesville, I’d wager that this was only a slice of the likeminded people that exist in America.  Maybe other bigots couldn’t afford the cost of travel or the time necessary to represent in Charlottesville, or perhaps they were just smarter to not put themselves in harm’s way.  But now, I’m going around imagining that there are still lots and lots of white folks out there concealing prejudices, disguising their disdain, and harboring hatred out there, whether they’re making it public or not.

But for what it’s worth, the events of Charlottesville have definitely damaged by trust in the white community.  Which is pretty shitty, considering all of my white friends, my white girlfriend and the oft-accusations I get for being white-washed.  But I can’t change what I look like, which is that of an Asian person, and that that fact alone is going to make some hateful people out there hate me for no other reason than that I’m not white.  And I’d rather be a little jaded and prepared for the worst, than to naively assume that just because a person isn’t actively trying to inflict harm or discriminating me directly, that they might not hate me secretly.

Is it fair to all the people around me that I might not trust them?  Absolutely not.  I know not everyone is a bigot.  But to strangers and people I don’t really know, the jury is perpetually out.  But it’s also not fair to minorities that we’re living in a country built on equality, opportunity and the American Dream to assume we won’t have some manner of guard always up in a country where people gather, unapologetically and unafraid to spread their message of blatant discrimination and hatred for those not like them.

This is what Charlottesville has done to me.  I can’t speak for anyone but myself, but I don’t believe for a second that this isn’t what it has probably done to many other people as well.  It sucks, most definitely, but as long as shit like this happens, even in the “civilized” year of 2017, those of who aren’t white will always, have to have their guard up.