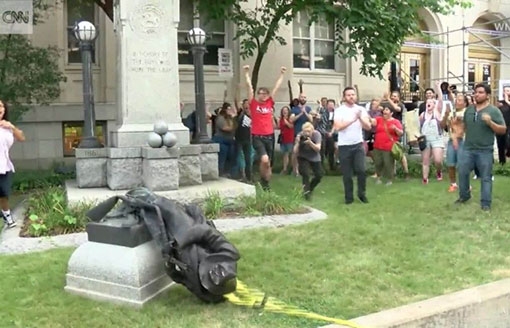 Those who cannot remember the past are condemned to repeat it.

Across the country, statues representative of Confederate history are being defaced, vandalized, toppled or removed outright.  I understand why these particular symbols are being attacked especially in relation to current events; but I don’t agree with it.

Sure, the Confederacy is symbolic of racism, and racism is a never-ending hot topic, but I just think that there’s something inherently risky about the rabid want from the left to have all Confederate statues and monuments removed.

I don’t like the whole slavery and discrimination representative of the Confederacy as much as the next liberal-thinking individual, but I’m also cognizant of the face that this shit actually happened.  It’s history, these are things that have actually occurred on American soil, and I think that there is something important that we as Americans, should always remember this kind of stuff, whether it is good or bad.

Removing statues, plaques and historical markers doesn’t delete history, but it does serve to assist in the forgetting of it.  And forgetting history leads back to that famous quote that has been paraphrased and misquoted by many, however with the intended meaning never really changing: those who cannot remember the past are condemned to repeat it.

All these demonstrations to remove historical markers of the past, that are succeeding, only expedite the eventual fading from remembrance of the metaphorical past.  And once forgotten, society will undoubtedly be condemned to repeat it; because the groundwork is already here, with a completely divided American society where angry people on the right with diminishing concern of keeping their racism and bigotry veiled, and angry people on the left eager and willing to stand toe-to-toe with those who have different beliefs.

I’m not saying that deleting all Confederate historical markers from the country is going to definitively result in Civil War II, but can it really be argued that it hasn’t already started and been going on for years already now?  Just because there’s not a death count in the hundreds and thousands doesn’t make this any less of a war.

Admittedly, I’m bouncing around here in my thoughts.  The bottom line is that I understand why people are angry and why they’re protesting and lashing out towards Confederate monuments.  I just however think that there’s something dangerous about outright removing them all, because love it or hate it, they are ingrained in the country’s history, and I think there’s far more value of educating people of shitty things that have happened as opposed to trying to pretend like they never existed.  This shit happened, and knowing that it did and educating yourselves about how that turned out might actually make people think about their own current actions in the present, as opposed to blindly following towards the extremes.