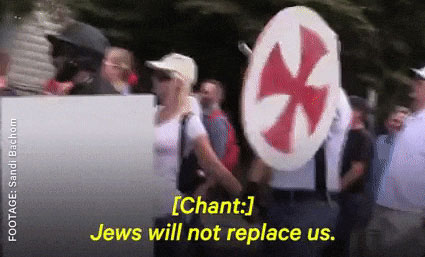 Among the vast majority of nerds that comprise of the vast majority of my social media circles, there was an individual that many of us knew/knew of identified as having been present in Charlottesville during the weekend of hell there.  This was confirmed by commentary made by them that stated as such, and that’s pretty much all that there needed to be known by the community before the witch hunt began and the shit started to fly.

Typically, my go-to move on social media is to unfollow people but not outright unfriend people, if I don’t like seeing what people post.  Whether they post too much for my liking, post opinions that I don’t want to see, flood my streams full of narcissism and/or selfies, or all of the above, among other reasons, I’ll usually unfollow first, but rarely unfriend.  I don’t want paranoid people eventually discovering that they’ve been unfriended and to have an uncomfortable conversation later down the line, and if it can be avoided, I’d rather avoid it.

But it’s not every day that you find out that someone you know personally, have allowed into your home, and allowed to pet and carry your dog, with smiles and seeming sincerity, marched in a rally and chanted discriminatory rhetoric with known white supremacists.

This is why my trust in white people has taken a critical hit, and why I can’t feel like I can ever let my guard down with them.  Even those that I’ve known for a while, apparently.

Needless to say, this was an unfriending.  To be honest, I don’t wish this person any ill-will in spite of their actions, because I just don’t.  Oppositions to the extreme-right kind of need to be approached with compassion and not ill-will, because otherwise it would be no different from their mentality.  And admittedly, I feel that the decision to unfriend came from the passive pressure from those on social media that were scrutinizing and examining mutual friend lists, and I know they were seeing my name included there, and I don’t want to be added to the crosshairs of the wrath of the internet.  That part kind of sucks, but it’s all propagated by the shittiness of social media in general, but that’s an argument for a different day.

Back to the original point, I’m as surprised as all my friends and internet friends about this revelation.  Given the fact that most of us are nerds, with long histories of being criticized and alienated for behavioral and differences in, things, it’s most certainly surprising to see one of our own to have been harboring some extremist views towards a variable we probably wouldn’t have imagined them to have any towards.

I’ve known this person since we were both 16 years old.  I’m not going to pretend like we were anything more than passing acquaintances, and we knew everything about one another.  But given our mutual interests and tendency to be at the same nerdy events, I wouldn’t have imagined that this kind of discriminatory behavior was behind the scenes all this time.

To think I didn’t really feel like I had anything to write about just a day ago, too.  I wish I still didn’t, than this.