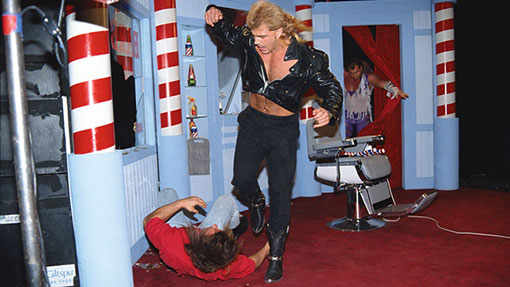 News to me: Marty Jannetty wants to bang his supposed daughter

As if life weren’t bad enough being Marty Jannetty, the wrestling failure buried six feet under in contrast to his former Rockers partner Shawn Michaels, who became one of the most successful and decorated wrestlers in the history of the industry, now he has to emerge from the shadows of nostalgia with news that he wants to bang his daughter.

Up until this news, “being the Marty Jannetty” was a euphemism of being the weak link in a team, and applied to situations not just related to wrestling, but any scenario where one team member was as unskilled as the other(s) were talented.  But I think with this uncomfortable revelation, being a Marty Jannetty kind of has a new and unpleasant meaning.

In all fairness, an alleged DNA test that Jannetty claims to have happened revealed that he and his so-called daughter are not biologically related, but prior to that discovery, the relationship between them was that of a man trying to establish a relationship with an estranged daughter; except somewhere along the way, romantic feelings emerged between them, and whether or not they’re actually related, there exists some incestuous urges between one or both of them.

Regardless, these feelings of wanting to bang his daughter couldn’t have just spontaneously emerged upon the revelation that they weren’t actually father and daughter; shit’s obviously been brewing for some time, and the temptation to act on it regardless of the DNA test definitely was there.  Jannetty should be so lucky that it turns out that they’re not father and daughter, because even as gross as it is to have a 50-something banging a 20-something couple relieved to not be related, at least it’s not as entirely disgusting and immorally wrong as if they actually were related.

To think, it used to be shameful to be the Marty Jannetty of any team, because it used to just mean you were the least talented member of a team.  But now being a Marty Jannetty is a completely horrific and taboo accusation that just about every man in the world should probably hope to never be accused of in their lifetimes.

As for the real Marty Jannetty, he should probably go back into hiding again for a little bit.  What he chooses to do in his personal life, he should probably stay away from computers and social media for quite a while as well.  Because although he deleted his controversial post(s), the internet never forgets shit, and if it was seen by one person at one point, it can be seen by everyone, at any time, forever and ever.

You can be damn sure Shawn Michaels never would’ve made this kind of mistake, but that’s why he’s the Marty Jannetty.