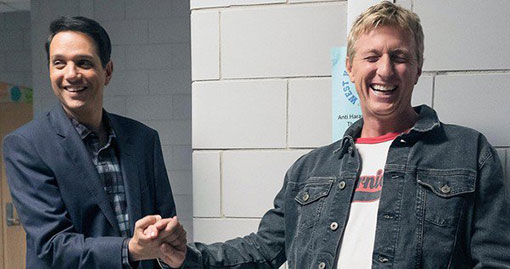 The word people my ancient age are really beginning to identify as a legit trigger: spinoff.  As in The Karate Kid is filming a spinoff show, starring Ralph Macchio and Billy Zabka, about their fucking kids and their own miserable, post-Karate Kid lives.

This one hurts.  I tolerated Fuller House and Girl Meets World because as much of an old-man stink as I made about their spinoffs, because as much as I actually did watch the shit out of those series, I didn’t really care about them.  Same goes for whatever Roseanne spinoff they’re plotting.

But The Karate Kid?  THE fucking The Karate Kid??  With Daniel-san and Mr. Miyagi and Cobra Kai and get him a body bag yyyeeeaahhh??  This one hurts.

This one hurts, really bad.

Why the fuck can’t people just let the classics live out their lives and die peacefully?  Why does some fucking asshole(s) have to dip into nostalgia and dig shit out of their treasured pasts and bring them back into this shitty present time with social media and retards as elected officials and other literal and metaphorical cancers, with weak, convoluted, fan-fiction-caliber storylines and their kids’ perspectives for the promises of paydays?  Why the fuck can’t these actors manage their money or their egos where they don’t feel the need to accept these miserable spinoffs for the sake of their own classic bodies of work?

For god’s sake, Ralph Macchio is currently appearing in The Deuce, which is a pretty good show btw.  Why does he feel the need to tarnish his own legacy with a spinoff?  It goes without saying that without his participation, this whole thing wouldn’t have taken off, because Miyagi is long dead, and probably thankfully so, so Pat Morita doesn’t have to witness this piece of shit come to fruition.  William Zabka might be a cult-anti-hero, but he doesn’t have enough legitimate star power to have gotten this off the ground, but Macchio giving his blessing is fuel this god damn rocket needed to take off.

And the story sounds like literal shit.  No, not the figure of speech, the synopsis of this show literally sounds like the noises a human rectum makes when it’s squeezing fecal excrement out of the bowels, through the butthole, and plopping into a porcelain bowl of water.

And of course, the recipe for all spinoffs have to include the fucking children.  Whatever this fucking piece of shit is going to be called, is going to have Daniel’s daughter, Johnny’s son, and a third-party child who happens to be Latino, because nothing says 2017 than needing to fill out all the checkboxes of gender and racial inclusion.  However, I’d wager money that unlike Billy Zabka’s formal martial arts training, none of these kids will actually have any martial arts experience, and the show will basically look like three Ralph Macchios trying and failing to fake their way into looking like they have any inkling of martial arts acumen.

Overall, I’m not going to lie and say I refuse to watch it.  I certainly won’t pay a dime to get access to YouTube:RedTube, but I’m sure I’ll manage a way to watch it regardless.  I’m too much a sucker for old man nostalgia, and I’ll inevitably run into this series.  The biggest fear is that it might actually be presented in a manner not too offensive to my old man nostalgia, and that I might actually like it, but if any spinoffs in the past are any indication, the ceiling is extremely low, and the chances of disappointment are gargantuan.