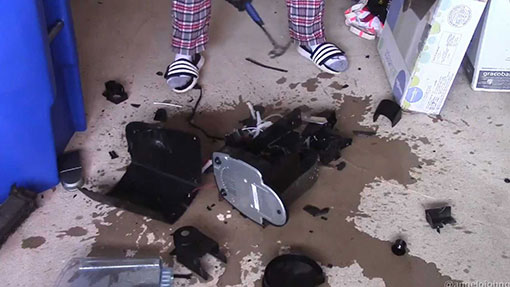 For reasons completely outside of my comprehension, I’ve come across numerous articles about how people are deliberately smashing and breaking their Keurig machines out of protest for them pulling their ads from some talking head show.

The first thing that comes to my head is: why??

Keurigs are expensive machines.  I love my Keurig.  It allows me to have consistently reliable coffee at the push of a button, and I never have to worry about making too much or too little, and ever since I switched to a reusable pod, the whole wasteful argument from k-cups goes out the window.

I would never destroy my Keurig because I disagreed with their non-business related views; they’ve already gotten my money, what’s the sense of destroying it out of protest and denying myself future coffee that I rely on and enjoy so much?

Even if I were in a position where I had replacement hardware for my Keurig, and could feasibly destroy my Keurig so I could try and fail to farm attention on social media, I still wouldn’t.  Instead, I could give my old Keurig to someone who might benefit from having one, or better yet, donate it to charity, so I can inflate its value on my taxes and actually make a little bit something back from it.

Like sports jerseys.  We’ve seen plenty of jerseys being burned, shot, shot-then-burned, or destroyed or degraded in some sort of fashion throughout the years.  LeBron James Cavs jerseys, when he jumped from the Cavs to the Heat.  LeBron James Heat jerseys when he jumped back to the Cavs from the Heat (lol at all the fucking losers who burned their prior jerseys that have to drop another $100 on replacements).  Colin Kaepernick jerseys for standing up for his beliefs.  And all sorts of other jerseys destroyed in the name of protest.

What did any of those accomplish?  Dick!  These sheep have already lost their money and padded the pockets of those they once supported, and destroying these jerseys changes nothing about it.  If anything at all, most of them end up screwing themselves over with their violent stupidity, like when LeBron James comes back to the Cavs, or like when the Baltimore Ravens offered up free replacement jerseys to anyone with a cooler head who didn’t just burn or destroy their Ray Rice jerseys.

But for whatever reason, people just like to destroy shit, regardless of the foolishness of doing such.  Often times in front of a camera, so that it can be shared recklessly on the internet for the amusement of others, more often than naught on the ironic side of things however.

And I just don’t get it.  The things being destroyed are often things with actual value in some way, shape or form, and personally, I’d rather try and extract whatever value possible from something, before I come to the decision that I should just destroy it and film myself doing such.

Granted, it’s not lost on me the hypocrisy of criticizing those who destroy shit, considering I once destroyed a CD from a particular artist whom I didn’t care for.  But if I may backpedal a little bit, it could be argued that it did fall down the criteria list, although simple destruction of it was my knee-jerk reaction.  I got the CD for free, along with a few others, from a radio promotion, so it was no money out of my pocket, but in spite of the promotional stickers all over it, I probably could have flipped it for some money, or at least given it to someone who enjoyed them.

Welp, I never said I wasn’t an occasional hypocrite, but this was also 12 years ago.  I’ve since learned the error of those ways, and instead feel perfectly justified to criticize those who have not.  Shit’s expensive these days, and best to extract what can be extracted, before destroying it for petty attention.