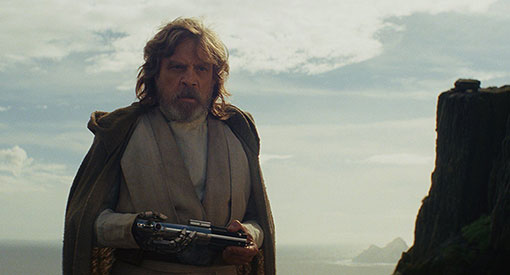 I walked into the theater completely blind, because I staunchly avoided seeing anything and everything in regards to the film because previews and even teasers give away more information than is remotely necessary.  I wanted to know jack shit going into it, so that I wouldn’t have any preconceived notions or expectations, and nothing but my own predictions formulated from the events from prior film.

The Last Jedi wasn’t the best installment of the series, but it was far from being remotely close to the trash that the first three episodes were.  I do not think it was not better than its predecessor, The Force Awakens, and if I had to rank the series, it would go as such:

The Last Jedi was still an entertaining movie, and the storytelling was smooth and pretty polished, albeit a little bit predictable.  It’s often interesting to me how stories today rely so heavily on tension-breaking moments of levity in which tiny jokes or smart-ass dialogue is utilized.  It’s almost to the point where viewers can almost anticipate something silly is going to happen, because swerves and twists seem to be the preferred plot device to use in order to sneak key points throughout without inquisitive viewers putting the pieces together too far in advance and ruining the suspense.

I doubt that I would see the movie a second time, which isn’t to say that it’s indicative to the quality of the film, I can’t really say that I’ve seen any movie in a theater twice since like, the original Jurassic Park.  But TLJ didn’t hit that lofty mark to where I’m compelled to drop another $16 to see it in a theater full of mouthbreathers regardless.

There are some parallels to Empire that I think exist in TLJ, but I’m also of the camp that felt that The Force Awakens was kind of a metaphor for A New Hope, and I almost have an expectation that this trilogy is going to almost be something of a retelling of the original; not that there’s anything wrong with that plan.

But for what it’s worth, TLJ was still an entertaining movie, and two hours sails smoothly along, and I didn’t begin to feel like I was sitting in purgatory waiting for the film to eventually end.  It was refreshing seeing some familiar characters, and I felt the development of the mainstays is churning along at a good pace.  And as many of my peers have pointed out, it’s great to see that Lucas Films has realized that diversity exists nowadays, and there are noticeably more minorities and women present in the foreground and background, and not just backfilled with CGI aliens.

It is still a must-watch for all Star Wars fans, and I definitely think that TLJ does a better job of setting up the final chapter in the trilogy’s trilogy, and it’s going to be a lot of anticipation for the culmination of the story.  Good thing they’ve learned the popularity and profitability of stand-alone edition films like Rogue One, and the eventual Han Solo story.