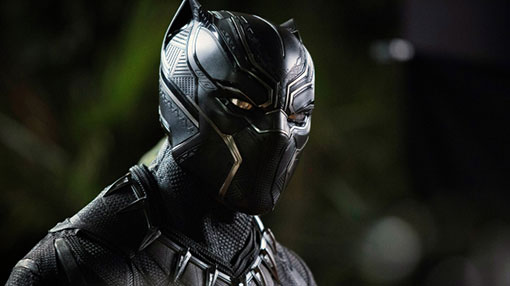 When mythical gf and I got to the theater and took our seats, they happened to be like in the third row and way off to the left.  Granted, theaters have come a long way to where it’s not nearly as bad closer up front than it used to be, and we had seats angled to face the screen that also reclined, so it could easily have been way worse, but there was a brief moment where I thought that it might’ve been preferable had we waited just a little bit and gotten more direct facing seats.

However, the following morning, I kept hearing from every interested movie goer that they couldn’t find a single theater that had any available tickets left for any reasonable showtime of Black Panther.  Showings were being shown as sold out just about everywhere across the Metro Atlanta area, and suddenly getting to see the movie when we saw the movie didn’t seem like such a bad thing after all.

Anyway, I have a lot of thoughts about Black Panther, and to cut to the chase, none of them are at all bad.  Full disclosure, I’ve never really been a fan of the comic book, and I’ve always held Black Panther on the tier of Marvel superheroes like Thor and Daredevil but still above shit like Iron Fist or Quasar, as properties that I knew existed, I knew their place in the Marvel Universe, but I just didn’t really give a shit about.  I liked X-Men the most, enjoyed singular properties like Iron Man and Spider-Man, and I’d been on and off with properties like the Avengers and the Fantastic Four.

Needless to say, the prospect of a Black Panther film wasn’t something that excited me much when I heard about it, but the Marvel Cinematic Universe had made me capable of enjoying properties I was lukewarm about like Thor and Ant-Man, so it was also safe to be optimistic about a stand-alone Black Panther, especially with the exciting manner in which he was introduced in Captain America: Civil War.

I think it goes without saying that no single Marvel film has had the magnitude of hype that Black Panther has had, and there’s very obvious reasons of why such was the case, given the tumultuous social climate we live in today in the 2010s.  One of the challenges that I had during the hype, arrival, viewing and post-thinking of the film was creating separation between the film itself and everything that the film stood for in modern society.

As a film, Black Panther was solid, with a story that wasn’t overly complex and very straightforward, pacing that didn’t really give many lulls or feel like there were rest periods, and great casting with an all-star line up of primarily black stars who all have their moments to shine and command the screen.  Whereas I always felt that comic Black Panther was always a little too preachy, often high-and-mighty, and kind of a dick because of the whole WAKANDA FIRST attitude, the film actually made the character more tolerable, mostly in part to the supporting cast who were written brilliantly to humanize him and make him a more interesting character.

But as I found myself saying frequently after the film, Black Panther was more than just the film, and it is no more apparent than looking around at all the hype for the film, going to the film itself, and seeing the anticipation for the film from those who haven’t seen it.  One would have to be blind to have not seen the sheer magnitude within the black community prior to the release of the film, as it’s obvious what it means to them that a film that’s part of the vaunted MCU is pretty much all black performers, and they’re not all just token villains or glorified mascots.  And then there was a lot of what I felt was a little too obviously white guilt for helping amp the hype up, and I did my best to try to filter out what seemed like actual hype, and what seemed like white guilt hype.

Upon going to the show, it’s no more apparent than the litany of black people present to watch the film; and not to generalize too offensively, but are clearly not there because they’re fans of the comics or even know what the comic book is about.  People of all ages, some wearing Black Panther t-shirts, and even a few older couples wearing colorful, almost Cosby-style clothing that is to say that they’re colorful and often emblazoned with colors found in African culture.  And then there were the comic nerds and MCU geeks to fill in the gaps, but it all amounted to a packed house, and that seems to be the case with theaters all across Atlanta throughout this weekend.

Like I said, this was more than just a film.  And that’s probably the one thing that no other film in the MCU can really say, unless you want to add the Netflix cousin, Luke Cage into the debate.  But speaking of Luke Cage, I think Luke Cage was more obviously blunt and obvious about their social statements, but that’s what they could do in long-form television that’s definitely more TV-MA than MCU films go, but Black Panther is a slightly more refined approach that touches on issues, and without once needing to use a particularly inflammatory term.

I think as a whole, Marvel Studios did a marvelous job of toeing the line of creating an addition to the MCU family that manages to stand out as something of a socio-political statement without alienating itself from the grander scheme of what all the films are tied together in.  It acknowledges and lightly touches on social topics that most black stories attempt to do without letting them take over the whole film and keeping them within the boundaries of the universe.  I don’t think most people will realize probably just how hard it was to do all of that within a singular film, and I think Black Panther deserves a gargantuan amount of credit for accomplishing it.

Walking away from the film, I feel that there’s reason to be optimistic for more Black Panther, and hopes that he plays an active role in future MCU films.  Which is a win for everyone, regardless of what the reason for seeing the film was.

Random thoughts about the film: