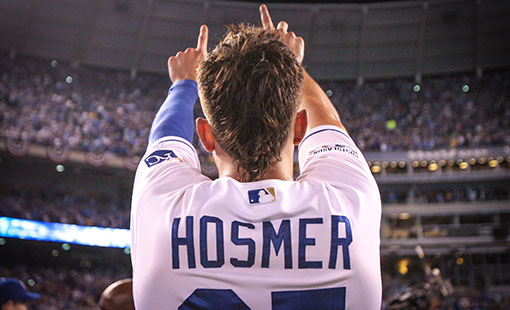 Not that anyone but me, or any other baseball geek that’s remotely interested in baseball statistics and the Moneyball game of salary management within the sport, would care, but Eric Hosmer just signed a free agent deal with the San Diego Padres.

This is not really major news, even by baseball standards.  Hosmer seems like a pretty good guy, and I’ll always remember how synonymous he was for the leadership he exhibited in 2015, leading the woeful Kansas City Royals to their first World Series championship in like an entire generation.  The team he signed with, the San Diego Padres, haven’t been good nor remotely relevant since Ray Kroc owned the team.  The bottom line is, Eric Hosmer is a pretty low-key baseball star, and the Padres are a very low-key existing baseball team, so the union of them isn’t particularly groundbreaking news, even despite the fact that sheer lack of free agent signings has been a somewhat notable topic throughout this baseball offseason.

However, the thing that’s the most interesting to me is the structure of Hosmer’s deal with the Padres.  The bare bones summary of the contract is that it’s an eight-year deal for $144 million dollars; but it’s not as simple as saying Hosmer will be getting exactly $18 million a year, because rarely will there ever be a long-term deal where a player simply gets the average number between the total amount divided by the length of the contract.

Typically, baseball contracts are often structured in a manner in which a player makes a pretty reasonable amount the first year, but then the annual salary of ensuing years typically ramps upward, and usually the last 2-3 years of a contract are where they peak, and you’ll see players making ludicrous Oprah-rich numbers of like $20-30 million dollars during those later years.

The problem with such a structure is that baseball players have extremely short windows of peak performance, and in like 95% of free agent contracts, by the time the player reaches the end of the contract, the performance-to-payment ratio has completely flip-flopped, and a player with declining baseball skills is making way more money than they deserve.  Even the greatest players of numerous generations fall into this pattern, from Pedro Martinez, Alex Rodriguez, to Jesus Christ himself, Albert Pujols; all of these men at one (or more) point in their careers signed giant money contracts, and by the time they were ending (or in the case of Pujols, still going), their skills have declined with age, and they’re perceived more as financial albatrosses and hinderances to their team’s finances, rather than the stallions of baseball talent that garnered them their lucrative deals in the first place.

Usually, these guys are either reduced to a bench role while a younger, superior player arises from the minors or through natural growth, to take their positions at a fraction of their salaries.  Or they’re traded off to another team, often under the condition that the prior team still covers a negotiated portion of the existing salary in exchange for “taking them off their hands.”  Or, they’re simply let go outright, where the team will still be on the hook for the giant salary, but at least the spot on the roster is freed up for someone who might be more useful to the team.

And in rare cases, there are dumbasses like the Mets or Nationals, who cut the expensive salaries from the books, and negotiate a deferment plan for the future, where they’ll ultimately pay more in the long run for financial flexibility in the present.  The Mets to this day are still paying Bobby Bonilla $1.2 million a year, and will be until like 2028.  And in like 2020, the Nationals will be on the hook for nearly $25 million dollars, for three players who in all likelihood won’t even be on the team then (one is already gone).

It’s a perplexingly flawed system, yet just about every team in MLB goes with it, and there’s seldom any single team other than the Marlins on a yearly basis that doesn’t have at least one guy getting paid more money than they probably should of, by virtue of some escalator free agent contract signed at some point.  Even my cheapskate Atlanta Braves, as much as they’re averse to spending any money, and as much as they bilk from Cobb County, even they’ve dealt or are still dealing with dead weight players, sucking the teats of salary from the Braves, or will be soon.

In fact, the Braves have a guy they believe have declined so much, they’ve actually let him go from the team, but will still be paying him $22 million dollars, to soon be playing against them for the New York Mets.  In the past, the Braves have had to eat the tail ends of the contracts of other shitty players like Dan Uggla and BJ Upton’s declining corpses, and even let them both go, since they’d rather have the roster spots.  And as much as I love Freddie Freeman, by the time 2021 rolls around, there’s a good chance that the team will be looking at him as a financial hinderance, with his $22 million salary, and hoping he sucks or declines, so they don’t have to deal with the scenario of having to re-sign him or pay him more money to stay.

But getting back to Eric Hosmer’s deal with the Padres, it’s a little more unique in the fact that contrary to most baseball contracts, this one is front-loaded, and actually escalators downward towards the length of the deal.  Whereas he’ll be in the $20 million average salary for the first five years of his deal, in the final three years of his deal, he’ll be making a less ludicrous $13 million per.  Sure, that’s still an absurd about of money for us nonathletic pleebs, but in baseball numbers, $13 million is often considered “reasonable” for a starting position player.

The difference is that by the time the contract nears its end, Hosmer will be 33-34-35 years old in those final three years.  Those are still ages in which a player can still have some peak skills, depending on how well they take care of their bodies and how smart they are, at adapting to the game.  But at $13 million instead of $21 million at the tail end suddenly looks like a more economical asset, and it puts the Padres in a very advantageous position to where they could trade Hosmer, and he’ll not be seen from other teams as such a financial albatross they’re taking on, as much as they see a guy with a more reasonable salary that might be worth forfeiting some prospects for.

For years, I’ve been tooting the horn that baseball should engage more in the practice of front-loading contracts, because there’s just something logical of talented players making the most money when they’re hypothetically at their greatest talent, and as their skills decline, make less money.  Why it has been the norm to operate in the reverse, I understand, but it’s still no less perplexing on how it came to be.  But I’m looking forward to seeing how the Hosmer deal works for the Padres, and although I still think the Padres overpaid for him, I’m still interested to see how the next few years will be, and I predict Hosmer will be traded in either year 5, or year 7, for a hotshot prospect from some other team’s farm, or for a talented component if the Padres ever break through the glass ceiling of mediocrity and actually pose a threat to contention.

Either way, I’m glad to see some team engage in an idea I’ve had for literal years, and I’m looking forward to seeing if I’m really as baseball smart as I like to think I am sometimes.

*actually I have before, cha-ching