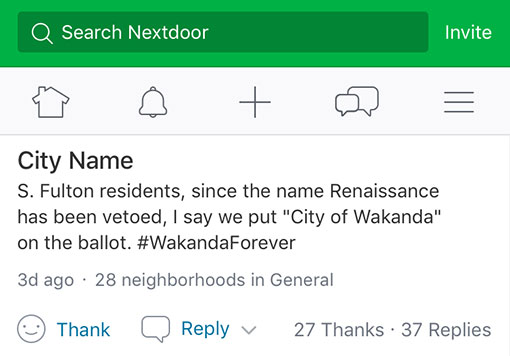 So it’s been a little bit of time since the rise and fall of Renaissance, Georgia, ironically before it even got to be risen officially.  It’s actually been quiet since then, which means the twisted local government is either plotting their next attempt to deceive the people and roll something out without any of their representation, or perhaps they’re busy watching Netflix instead.  Either way, with the failure that was Renaissance, the name of the area remains the cold and callous sounding “South Fulton.”

And unless you’ve been living under a rock, Black Panther-mania has taken over the world for this hot second, and few people in the world can actually say anything bad about the ground and record-breaking film.  Needless to say, all things Black Panther has been on the tips of everyone’s tongues this week, as just about everyone in the world is still seeking out tickets and trying to go see the film for the first, or third times.

I saw this “joke” pop up on my old neighborhood’s Nextdoor account, and my first thought was “too easy.”  A city in the Metro area that’s like ~80% black wanting to call themselves “Wakanda?”  You don’t say!

But then I thought about how alternatives would have been shit like “Renaissance” or “Atlanta Heights” or something else shitty, and suddenly Wakanda doesn’t seem like such a bad option.  Not only is it ironically funny if it were officially in place, I have to imagine that just about every person who’s seen Black Panther at this point would be completely on board with it, thus eliminating the whole “you can’t change shit without us the people” conflict would be out of the equation.

And as much as I make fun of Nextdoor for it being such a robust source of ironic people watching, it’s still populated by a rather substantial number of people who understand and exercise the importance of voting, and if they’re any indication of the populous of the City of South Fulton, then there’s a very strong chance that Wakanda would actually have some legs.  This idea has a laundry list of people in favor of Wakanda, and I’m not entirely sure a lot of people realize that the initial remark was a joke.

Granted, ultimately the biggest roadblock would be that little thing called Marvel/Disney’s intellectual property, and how they’d stone wall an attempt to utilize a name without paying gobs of money for the rights to do so faster than a crowd of people whip out their phones to take photos and video instead of call the cops during a violent incident, but people can have hopes and dreams right?

Shit, I’d vote for Wakanda if I still lived down there.  I enjoyed the film enough to do so, and frankly Wakanda would obviously be a better choice than anything else the local government would try to force down the throats of the people.  Plus, it would be hilarious and entertaining to tell people that I lived in, or used to live in, fucking Wakanda.  And when they’d point out that I wasn’t black, I could no sell them, cross my arms and do that chest clap thing they do and say “Wakanda Forever” as if that mattered.  Man, and then maybe the prideful Wakanda mentality where people actually cared about their homes would start to take hold in South Fulton, and the place would actually grow and develop out of the crime-ridden, neglectful wasteland it is now, except that probably wouldn’t happen, but again, we can wish, right?