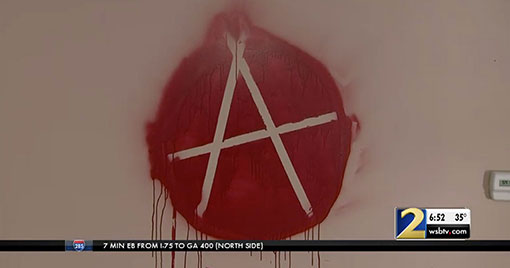 Impetus: vandals break into church, spray paint satanic symbols all over the walls

First off, I don’t condone breaking and entering, or vandalism.  I don’t even condone the smoking of marijuana, but that’s more an eye of the beholder kind of opinion.  And I most certainly feel empathy for this church that hasn’t even officially opened and had its first service, before some shitheads broke in and spray painted shit all over the walls.

However, I have to say I have a hard time getting over the vandals’ execution of the anarchy symbol (pictured) they left in the church; namely the fact that they clearly utilized some painters/masking tape in the process of making it, as indicative by the extremely clean and straight lines of the anarchy-A.

Look, I give them a little bit of ironic credit of thinking outside the box, and instead of just spray painting the standard circle-A line art of a traditional anarchy-A, they decided to try and be all artistic and reverse that shit out, and knock out an anarchy-A out of circular blob of clearly-satanic red.

But in the process, they kind of defeat the purpose of making an anarchy-A, because I have a hard time believing that satanists or anarchists care to be artsy and detail-oriented when they’re in the frenzy of tagging their anti-establishment symbols on property that doesn’t belong to them.  The fact that these vandals took the time to mask out an A shape, before spraying out a circle on top of it, and then taking the effort to carefully remove the tape and in all likelihood, admire their handiwork, oblivious to the fact that such clean lines and tryhard effort are kind of the antithesis of anarchy.

And because they did it in this manner, the end result doesn’t even look remotely cool.  Not that I believe in anarchy or the lifestyle choices that go along with those who do, but I can appreciate aesthetics when I see them, and this shit doesn’t even look good.  It’s like a bad idea with an even worse execution, and the only takeaway I get out of this whole debacle, other than these person(s) being disrespectful piece of shit vandals is that they suck at art, and should find more constructive outlets to their need to do illegal things.

The pastor of the church may forgive these shitheads, but I certainly don’t.  I do agree with the pastor that they need some help, but to be specific, I think they need some help with making art.  This sad tryhard rendition of an anarchy-A is an insult to all anarchists and people who have an eye for detail, and for this, in addition to breaking and entering and vandalism, should warrant, beheading.