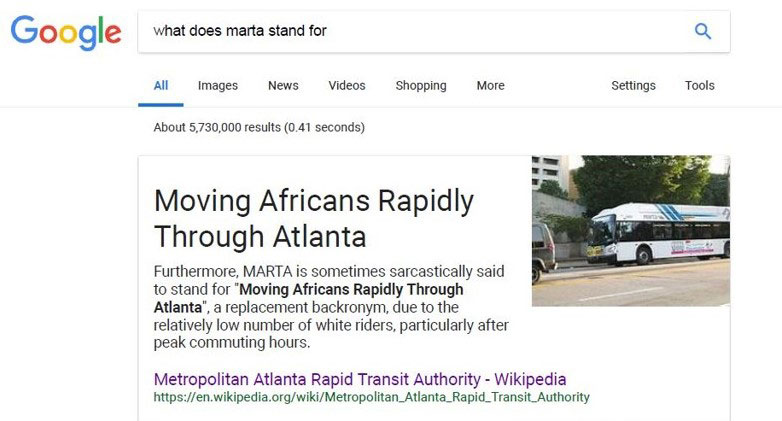 TL;DR – when queried to what MARTA stood for, Google’s response was the politically incorrect acronym

Known by many, spoken aloud by none; except among closed trusted company.  When I came across this story, my jaw kind of did a quarter-drop; it was one of those stories that was tailor-made for the MARTA criticism that I love to spotlight like it were sport.  If not for the simple fact that I’ve been slammed at work and only came across it during the few minutes I afford myself to surf the internet while I’m eating at my desk, I probably would have vomited out a ton of words in knee-jerk reaction to it, prefaced with a hundred lols or rofls, but such time could not have been spared at that moment.

But really, this is kind of the epitome of the perpetual failure of MARTA; I’ll be the first to admit that former CEO Keith Parker did a fantastic job of improving the infrastructure of the company a considerable amount, and actually managed to get their finances into the black, but the one thing that even he couldn’t really overcome was the sheer perception of the agency as a whole.  And as we all are firmly aware of, perception is reality, and if the perception of MARTA couldn’t be changed, it’s hard to say that that much improvement had actually really occurred.

A long time ago, I went to this coffee shop in Seattle.  It wasn’t just any ordinary coffee shop, it was one that had gained a little bit of notoriety based on the metropolitan trolley line they were off of that had their own unintentionally ironic acronym: South Lake Union Trolley.  The proprietor of this coffee joint had capitalized on the snafu, and started selling shirts ironically stating “Ride the SLUT;” and naturally because I’m forever 14-years old, I knew that this was something that I had wanted to see when I went out there.

While conversing with the guy, he basically talked about through the media coverage he received, he became something of an unintentional expert on the various transit companies throughout the United States.  I told him that I was from Atlanta, and he quickly named MARTA as being the transit authority that represented my home.  When I asked him if he knew what it stood for, he smirked and asked me if I wanted to hear the actual name or the unofficial one, but he didn’t wait for a response and immediately said “Moving Africans Rapidly Through Atlanta.”

Said a guy in Seattle, Washington, a city that couldn’t possibly be any further from Atlanta, Georgia.

We both chuckled, but then I corrected him and pointed out that anyone who’s ever ridden MARTA knows that there’s nothing rapid about the trains, and that it’s probably more appropriate that the R be replaced with “routinely.”  And then we chuckled some more, I bought a Ride the SLUT shirt and a café mocha and was on my merry way.

The point is, it’s hard to fault Google for being a racist when this is a phrase that has been ingrained and reinforced well beyond the point of no return.  And shit like this doesn’t occur without there being truth behind it, and the fact is that there’s no denying that the vast majority of riders are in fact, black.  I would say that only a part of it is sociological, but mostly because MARTA itself as a whole is ultimately, inefficient at serving the actual entirety of the Metro Atlanta area.

Granted, not all of it is MARTA’s fault; they can’t change that white flight exists, and that counties like Cobb and Gwinnett are anti-black racist and do everything in their power to make sure MARTA can’t have access to their self-perceived hallowed lands.  And even the most liberal of gentrification champions reach their thresholds of hypocrisy and tend to not admit that they’re nervous about riding MARTA too.  Especially with the evolution of ride sharing, it’s never been easier to get from point A to point B without having your own automobile now.

Changing the perception of MARTA was the one task that not even a visionary like Keith Parker could succeed in.  There are simply too many outside variables and too many social societal roadblocks that require the strength of more than just one driven individual to overcome.  And since he’s not that bad of a guy, instead of cashing his checks and coasting, he instead left MARTA to possibly go do good somewhere else instead, but the problem is that the meaning of MARTA is further condemned to be what everyone knows it as forever more.

And there’s no guarantee that the reps at Google are going to care every single time this occurrence happens, and given the fact that they have an office in Atlanta, it’s only a matter of time before their own employees and those within begin to shape their own opinions and conclusions of what MARTA really stands for.

If they already haven’t.