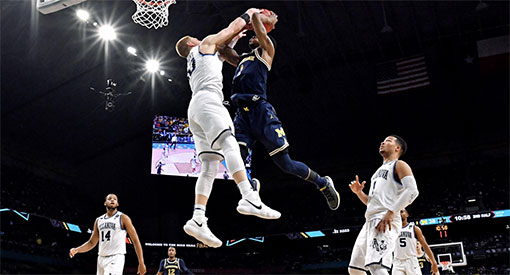 In short: Donte DiVincenzo plays the game of his life, leads Villanova to the NCAA men’s basketball national championship.  Shortly afterward, an offensive tweet from seven years ago emerges amidst the celebration.

This is a perfect example of why social media is fucking garbage.  A guy can’t enjoy the best night of his budding career without having to address teenage behavior from seven years ago that some fuckheads took the time to seek out in order to deliberately piss on a joyous celebration.

I’m not entirely sure why this story has set me off, it’s no secret that I think social media is a cancer on society.  I guess I take objection to the idea that on a night where a guy performs legendarily and achieves success, that there are people who are such assholes that they exert actual effort in order to look for a way to throw a wet blanket on someone’s well-earned celebrating.

Maybe it’s because DiVincenzo’s story was so epic; a second-stringer who came off the bench in the National Championship game and went completely bonkers, and shit on Michigan harder than Chris Webber calling for timeout, that who doesn’t want a guy like that to be able to enjoy the night where he had the game of his life and led his team to a national championship?

But nope; where there are people having a good time, there are people in the shadows on their computers or mobile devices who want nothing more than to throw wrenches into said good time.  And the thing is, the tweet they dug up, was probably DiVincenzo regardless of what he or Villanova’s PR team is saying, but the thing is, it was from when he was 14 years old – it’s like raise your hand if you never once said anything that could be construed as offensive when you were 14.  It would be entire arenas full of people with their hands down, because just about every single person on the planet has, done, said or written something that was offensive when they were teenagers.  Or wasn’t necessarily offensive then, but could easily be considered highly offensive in today’s standards.

Yes, the N word is never appropriate in any modern era, but DiVincenzo was living in Wilmington, Delaware, a predominantly black city, and he was playing basketball, and was clearly committed to the game enough to where he could get into a program like Villanova, and contribute towards National Championships.  It’s safe to say he was probably pretty surrounded by a black culture, and if Richard Pryor can “officially” give non-blacks permission to drop an N-bomb, the guys DiVincenzo might not have been too plussed by him tweeting one, especially in the context of rap music.

The bottom line is that this is a prime example of how much social media sucks.  Because it’s on the internet, nothing is ever completely eradicated, and every person is one good celebration away from having some shitheads feeling the need to piss on the party.  I’m sure if I ever miraculously manage to gain any sort of notoriety or public acknowledgement, there’s only 17 years worth of blog posts that I’ve published on the internet for some anonymous motherfuckers to comb through to look for something to publicly spotlight in order to shit on my parade.

Hopefully, this washes over quickly and becomes as quickly forgotten as the assholes who dug it up.  Because DiVincenzo’s performance was truly a legendary one.  I know a lot is being made of his 31 points, and the 9 straight points he scored including two monster fuck-you distance three-pointers to twist the knife into Michigan’s hopes, but nothing will beat the absolute Mutombo-like stuffing block he forced onto Michigan’s Charles Matthews (pictured).  Seriously, that block was something that anyone who’s ever played the game of basketball absolutely dreams about doing to another player.

I’d wager money that had DiVincenzo been black, he’d have heard the N-word a couple times after that kind of ownage forced onto another, but frankly, there’s little reason to believe that the color of his skin didn’t necessarily mean he didn’t.  After a game like that, most jocks would probably be willing to be a little lenient during hype of the moment.