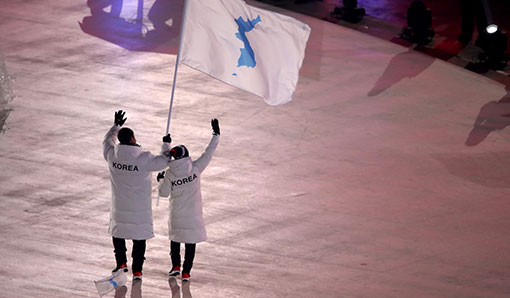 When news breaks about how North Korea and South Korea are considering a peace treaty, there are a myriad of thoughts that swirl through my head.  Considering when I was born as well as the vast majority of the people I know, we have pretty much only known a world where the Koreas are at war.  Sometimes, I’m surprised how many people don’t actually know that the Korean War never technically ended, and that it’s only through the Armistice Agreement in the 50’s that they aren’t physically fighting to this day, but then again considering this isn’t information so readily available on Reddit, Facebook or Twitter, I can’t really say that I should be that surprised.

But although peace is ultimately a worthy end goal for warring nations, I can’t help but be skeptical about it instead of as optimistic as I probably should be, especially as a person with Korean blood running through my veins.  I attribute it to a lifetime raised by television, movies, video games, comic books and professional wrestling that I’m quicker to question the legitimacy of two parties willing to come to a truce, than be pleased to see the progression towards peace.

Frankly, the most dubious of factors is the fact that it wasn’t even a full year ago that tyrannical Kim Jong-Un was basically mouthing off about how he could blow up the United States any time he wanted to, successfully baiting the cheeto-in-chief into a childish Twitter war.  I have a hard time believing that a guy who is one, well known for his general instability, that must be genetic, considering who his dad was, and two, someone who has been vocal about his disdain for the United States, to be so suddenly willing and accommodating towards the progression towards a peace treaty with a South Korea that is pretty comfortable with their positive relationship with the United States.

I get that North is in a precarious position where they’re basically disliked by most other countries in the world, and would probably be a unanimous public enemy #1 if the Middle East didn’t exist.  And as a result, life is kind of difficult for them on a regular basis, what with the country routinely not having nearly enough food for their people, and a laughably inadequate distribution of resources between regular people and those controlled by the government.  From an outsider perspective, it looks like to me that North’s biggest reasons to strive for peace is so that they can possibly get in on the global trade market that might make life in North Korea not quite as hard as it seems to be on a routine basis.  As it stands now, it’s my understanding that the vast majority of their trade comes almost solely from China, and putting all their eggs into few baskets can’t possibly be as fruitful as putting them into more and bigger ones, in this instance.  Even if it means dismantling their nuclear program, a peace treaty would undoubtedly unlock many doors in order for them to start being able to get resources from South Korea as well as possibly even the United States.

But that’s really the only reason why I can see why North would even entertain the idea of signing a peace treaty; and even if they did, I’m not going to believe that they’re going to suddenly be a contributing, positive member of the United Nations or anything, willing and capable of trying to maintain peace in the world.  No, I just figure they’ll do whatever it takes to prevent their entire country from starving, and with essentially time being purchased, who knows what nefarious bullshit they’ll be plotting in the shadows.

The bottom line is that I hope a peace treaty can be achieved, but I can’t say that I really believe that the animosity is going to simply vanish.  As great as it would be for the Koreas to basically be united, I just feel like there’s a big evil swerve waiting to happen if all of this goes through like a dream scenario.  It doesn’t matter if it’s immediate, or years later, with their safety somewhat secured for a little bit longer, who’s to say that this feint of peace is just one giant ruse in order to get their adversaries to drop their guard and leave themselves open to attack?

The thought of a United Korea, and the implied global safety that a unification seems like something of a pipe dream, especially those who are Korean, and I’m having a hard time believing that it may actually be on the cusp of reality right now.  If it actually happens, I’m inclined to believe that South Korean president Moon Jae-in should get a Nobel Peace Prize, considering that he hasn’t even been in office in a full calendar year, and he’s on the verge of successfully brokering peace with the North.

Ultimately, I hope that peace can be attained, but a lifetime of various influences that breed skepticism make me dubious, and considering all the players in play on the sidelines, I’m very cautious that one way or another, this most certainly won’t be an easy feat, regardless of how much progress has already been made to this point.