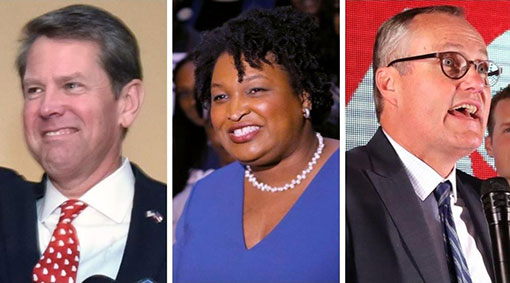 I’m always a little bit surprised at myself whenever I decide to write about politics, especially local ones that only really those people who live in Georgia, a smaller parameter would even understand.  But I guess caring about politics is one of those things that comes with age, for those of us who weren’t destined to be into politics as younger people, or who really knows, it’s something that I feel like I have some words to expend, and it’ll still be a ways before this even gets seen by eyes other than my own.

Anyway, long story short, Georgia has now narrowed down its field for the next governor of the state.  And in my opinion, no matter who emerges from this field of muck to become the next governor of Georgia, I hope Georgians are ready to suffer and/or be prepared to go back in time.  One way or the other, I can’t help but feel like Georgia is fucked no matter what happens in this particular race.

In one corner, we have Stacey Abrams representing the Democrats.  To say she won handily would be an understatement; at hoovering up 76% of the vote, she obliterated the competition, and patiently awaits the runoff to see who she will be opposed against on the Republican side.

Oh, and she’s a black woman vying to become the first black woman to ever hold a seat of elected state governor in the entire history of the United States.  Georgia may have become a little more progressive over the last few decades, but emphasis on “a little.”  Outside of Atlanta, Savannah and parts of Augusta, the whole rest of the state is still red as the Chicago Bulls logo, and I can’t imagine that people in these remote country areas are going to even hesitate to pick “not the colored woman” on the ballot in November.

Full disclosure: I didn’t vote for Abrams.  Primarily because I don’t feel she would have any chance of upending the Republicans in November, because as opposed to her opposition in Stacey Evans, Abrams has two things going against her in a big, white redneck filled state: she’s a woman and she’s black.  It’s not like Evans wouldn’t have just as of an uphill battle being a woman running for political office in Georgia, but I felt that she would have a better shot at upending the Republicans than a black woman would; especially with the blistering spending scandal that former Atlanta mayor Kasim Reed is embroiled in currently, I imagine trust in black politicians is at an all-time low currently in Georgia.

And on the Republican side, we have two white men who still have to go through a run-off to see which white man will have the honor of running for governor of Georgia: Casey Cagle and Brian Kemp.

Casey Cagle is probably most recently best known for being the blowhard who passionately showed his erection for the National Rifle Association when he lit into Delta Airlines, one of the state’s primary employers, and basically promised revenge in the form of tax reform because the private company had the audacity to take a stand against the NRA; in the oh-so jihad terroristic manner of denying NRA members discounted airfare.  This act not only made Cagle look like a moron who is very clearly the beneficiary of NRA dollars, but it also seriously puts the state in a precarious position to where Delta would actually consider leaving the state, taking their thousands of jobs with them.

And then we have Brian Kemp, whom I have legitimate concerns on his very existence because of just this, the fact that he is successfully continuing on his journey of actually threatening to become governor of Georgia.  This is the very same guy whose campaign ads featured him brandishing a shotgun and passively threatening another human being with to explain his points.  He too, has a raging boner for firearms, and it doesn’t matter if Cagle or Kemp wins, the one thing they very much have in common is a love for the NRA, and regardless of what transpires with gun control (probably nothing) outside of Georgia, Georgia itself will probably always remain a second amendment safe haven for those dumbasses who are obsessed with hoarding their own firearms.

Needless to say, both Republican candidates are shitheads.  If I had to pick though, Cagle seems to be the lesser of two evils, since he seems more like a spineless politician than Kemp would be, and when the day is over, that’s not always a bad thing, because spineless politicians are more apt to be easily influenced by money, and that’s how progressive shit gets done in Georgia, like the film industry moving in, along with companies like Porsche and Mercedes-Benz.

Naturally, the lesser of all evils is Stacey Abrams.  However as lots of parts of Georgia may want to be more progressive, voting for a black person and a woman seems like too far of a leap for many hicks whose votes unfortunately count, and I don’t think she’s going to have a chance, even if she promised free everything for everyone.  Which means, the Republican side still has the upper hand in this state, and as much as I don’t like to admit it, I’d have to hope that it’s Cagle who gets the nod over Kemp, because if Brian Kemp becomes governor of Georgia, this state is going to go back in time like 65 years.  [2020 note: this is one of those instances where I wish I weren’t so fuckin’ right about a prediction]  Cagle would only send the state back like a decade or so, and I think he’d be way more easily bought out by outside dollars, and shit might actually still get done here.