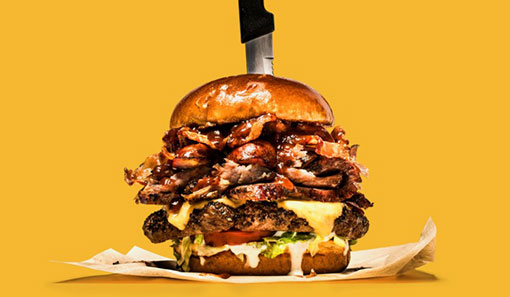 Despite the fact that I generally try to eat pretty clean the vast majority of the days of the year, every now and then I still cave into the temptation of absurdly ridiculous food monstrosities.  Fried Oreos, racks of ribs, Aporkalypses, Chinese buffets, Golden Corral, etc.  Sure, I certainly wouldn’t mind dropping 25-30 lbs., but at the same time, I’m not willing to go cold turkey on the good shit of the culinary world.

That said, I’m reading about Chili’s The Boss burger, and I’m just thinking to myself, “that doesn’t look half bad,” and “I can take this.”

Now I don’t have a jihad against chain restaurants like most of the people in the world who think they’re the anti-christ of commerce.  They exist, but often times pale in comparison to the better food available at the various local or independently owned restaurants that exist all around Atlanta.  But as far as chain restaurants go, I’m actually quite fond of Chili’s, even though I’ll probably be conscious to pay with cash the next time I ever go to one.  I think they have some of the better quality ribs available at a chain, and I can’t really recall the last time I was utterly unsatisfied by an experience there.

But with the emergence of The Boss, I can’t help but feel that my next excursion to a Chili’s is bound to happen sooner rather than later.  I don’t really care about the alleged 1,650 calories and lord only knows how much saturated fat in that burger, all I know is that it looks like an adversary that I can easily defeat and relegate into my digestive system, and I want to do it.

The Boss – we’re coming for you n–