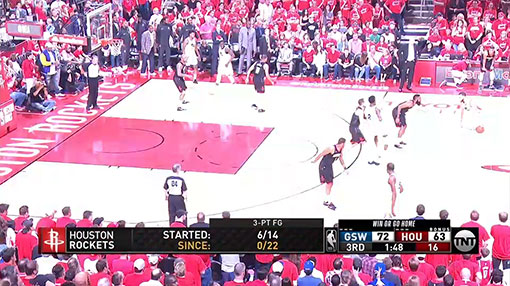 I’m not even going to bother prefacing the post about how I think today’s NBA is shit, it was better in the past, yadda yadda.  But the sports fan in me was intrigued by the fact that both the eastern and the western conferences were going to game 7s, and when I had little else to do on a long holiday weekend, I figured why not tune in to see what was happening?  When the dust settled, we were left with the Golden State Warriors versus the Cleveland Cavaliers; for the fourth straight year, which is a marvel in itself, and something that if Marty McFly told me was going to happen back in 1998, I would’ve disavowed the entire Back to the Future franchise as a whole.

I mean, going into the playoffs, I would’ve bet money that it was going to turn out this way; Golden State is the modern day super team that actually is super and actually does win basketball games.  And on the other side, we have LeBron James whom with each passing year truly deserves to have his name mentioned in the same breath as Michael Jordan and Kobe Bryant, as a player who inexplicably has the ability to win, by almost nothing more than sheer force of will sometimes, regardless of whom the Cavaliers field around him, because he just puts the team on his back and has overcome some majorly dubious odds this particular playoffs to get to where they are now.

But the point of this post isn’t about how great the Warriors are or how amazing LeBron James is, but more about how the Houston Rockets basically gifted the Warriors the west, and how they weren’t so much a team that was beat by the superior team as much as they were the squad of fucking idiots that simply didn’t understand how to change plans when it was abundantly clear that their Plan A was just not working.

The eye test when watching the game notices that the Rockets are jacking up an inordinate amount of three point shots.  The Warriors too, but the difference is that the Warriors were making a few of them here and there, while the Rockets were flinging enough bricks to build a village in Zaire.  The Rockets’ 11-point lead at the half was quickly whittled away and when Durant, Curry and Thompson started burying some practically half court shots to start taking the lead and begin their usual pulling away from the opponent spiel, the Rockets simply did not pivot and change up their plans accordingly.  Instead, they threw up bad three pointer after bad three pointer, and I’m thinking to myself, does this team know how to play basketball inside the key?

And then the graphic flashed on the screen to confirm the eye test, showing that the Rockets were a beyond abysmal 0/22 on three point attempts in the second half.  They would eventually miss five more before someone finally sank one, but by that time, the Rockets’ 11-point lead at the half was now a ten-point deficit at the start of the fourth quarter.  The Warriors would then cruise through the rest of the game and ultimately win by nine points, and just like that, an exciting seven-game series was reduced to seven minutes of a team begging for a mercy kill to cease the humiliation of being the vaunted 1 seed to get throttled at home to the team they basically had, had they simply just played not even just smart, but just fundamental basketball.

Suffice to say, the Houston Rockets are fucking stupid.  From the coach all the way down to the seventh man on the bench, the way they played basketball in a critical game 7 was pretty much the saddest team performance I’d ever seen.  The Knicks fan in me from the 90s saw a little vindication for John Starks’ poor game 7 performance against the Rockets, by an entire team of John Starkses who was combined to be way worse than Starks was back in 1994.  And then the sports fan in me that respects what basketball is at the core, was disgusted by watching a team of buffoons sticking to a plan that wasn’t working until it literally killed them.

Make no mistake, I don’t really have a beef with the Warriors, but ultimately I’m not really a fan of any team that becomes super.  I wanted the Rockets to win, just to see a little bit of change of parity in the miserable industry known as the NBA.  But because the Rockets are full of dumbasses, they choked harder than Hilary Clinton and now the NBA Finals is literally a rerun for the fourth straight year.  LeBron James is a beast, but I’m putting my money on the Warriors to repeat, because one man can seldom topple the super team, because if Durant isn’t beating the Cavs, it’ll be Steph, and if Steph’s not beating the Cavs, it’ll be Klay; all while LeBron is tanlged up with Draymond Green, talking about Twitter instead of playing basketball.

It’s hard to believe the Rockets won 65 games in the fashion in which got them to a game away from the Finals, but given just how shitty the rest of the NBA is, I guess it shouldn’t really be that much of a surprise.  Maybe the NBA should take the three-pointer away or something, just to prevent things from getting worse than it already is, because seeing a bunch of idiots routinely throwing up bricks in double coverage from 26 feet is cringey terrible.