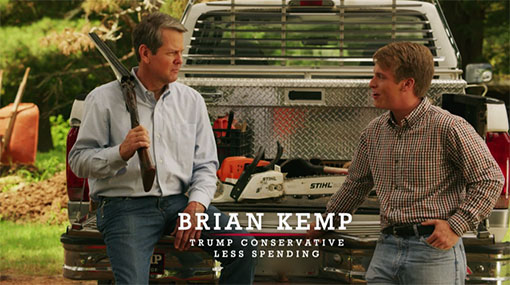 When it comes to politics in this country, I think I can say that nothing really surprises me anymore.  Despite the fact that we think we live in an extremely overly-PC society, we currently have a president who is outright flagrant about how not-PC he is, and countless people have become emboldened by such leadership to where PC is rapidly deteriorating to like, pre-Martin Luther King, Jr. days.

That being said, as much as I voiced my concern over a Republican candidate whose campaign commercial has him basically threatening a teenager with a shotgun, he’s knocking on the door to the office of governor of Georgia.  I’m not even the least bit surprised that this is happening, either.

Granted, he still has to overcome another shithead in Casey Cagle, who is no ordinary politician asshole himself, but between two evils, I think he’s the lesser one, and more of a politician snake who might like money, and would be willing to make the choices that wouldn’t appease the Republican party as much as it would benefit himself and inadvertently, the state, financially; which is at least somewhat beneficial to more than just straight white people.

And Kemp has made it this far by basically embracing the fact that he’s a baby Trump, who hates Mexicans and loves firearms, and is flaunting the fact that he wants senpai to notice him by declaring himself a literal “Trump Conservative.”  2016 logic would consider such a tactic as lunacy, but by 2018, we’ve all learned that regardless of the voices being heard, it’s viable tactic that appeals to a vast and influential populous that can easily emerge victorious when they come together.

But as far as I’m concerned, whomever comes victorious out of the Republican party run-off pretty much has a clear path to the Governorship, because I can’t imagine that even the most staunch Democrats are ready or willing to vote for a woman, let alone a black woman, for the state’s most influential position.

And if it’s Brian Kemp that comes out of the run-off with the Republican nod, then Georgia is as good as fucked.  No, I’m not going to declare moving to South Carolina, Tennessee or to Canada outright, but I will have plenty of words of frustration and anger for the Democratic party for being as reckless and arrogant to constantly be sending inadequate lambs to the slaughter over and over again without considering their opponents and underestimating them.

As much as they don’t want to admit it, the Democratic party has been jobbing like TNA wrestling, and any optimism and hopes for getting on the level of their competition feels about as hollow and fruitless as their run was, regardless of how many big names and money they once had to dump into their company.