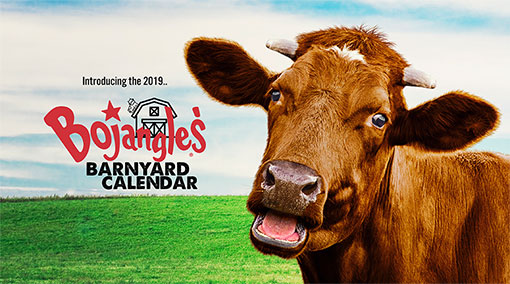 A week ago, I got a horrible email in my inbox: Chick Fil-A was shutting the door on their wildly popular cow calendar promotion.  Citing after 20 years something something, I couldn’t really make out the rest from the rage that welled up behind my eyes but the point is, Chick Fil-A was ending their calendar, which meant no more monthly free shit ever again.

Obviously, a company like Chick Fil-A doesn’t become go-zillionaires without watching every single nickel and dime, and somewhere in some analytical study, it was deemed that the free shit given out every month on top of the sales of the calendars themselves, don’t really match up to the money is expected to come in as a result.  So regardless of how popular the calendars are, although everyone and their mother knows people only get them for the 12 months of free shit, they’re closing the door on the promotion.

But amidst the outrage caused by Chick Fil-A killing off their calendar, Bojangles swoops onto the stage to announce the launch of their calendar.  Except Bojangles’ calendar is free to join, completely digital, but still offers coupons of free or discounted shit.

I think the best part about their launch is the savage way in which they pull the curtains back a little bit and acknowledge that people really only liked the Chick Fil-A calendar solely because of the coupons, with their headline of:

Either Bo’s caught some insider information that Chick Fil-A was going to shutter the calendar, or they have a team that worked really fast at whipping up the necessary graphics, promotion and analytics that this can work in the span of finding out Chick Fil-A shuttered to when they launched.

The bottom line is that I absolutely love the tactic and intent of Bojangles with this, and I’m really hoping that it pays out for them.  I already signed up and I’ve gotten my first coupon for a free bacon-egg-and-cheese biscuit, which is obviously going to get me to go by where I’ll inevitably get a Cajun filet biscuit as well, because no trip to Bojangles is complete without one.

No disrespect towards Chick Fil-A, because I still love the shit out of their food, but god damn did they get played hard by Bojangles in this arena, and they’re still the undisputed fast food choice of all Sundays.