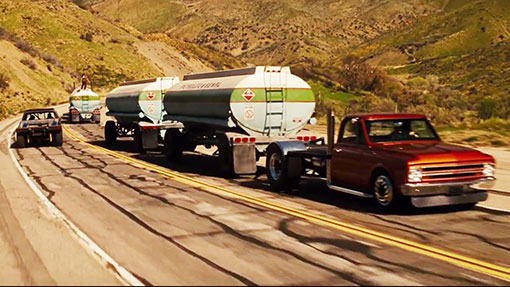 Pretty sure the container was more valuable than the cargo: truck containing allegedly $100,000 worth of ramen noodles stolen from rural Georgia gas station overnight parking

I know the article states that it was a semi-truck, but I have a hard time believing that something the size of a semi could actually contain $100k worth of ramen noodles.  Especially if they were actually like the cheap shit Maru-chan noodles that are like 10¢ a package, but the article doesn’t actually specify the brand of noodles taken.

Instead, I imagine that the only thing remotely capable of hauling $100k worth of ramen noodles would have to be one of those land train trucks that’s basically a semi hauling 3-4 cargo containers in succession, like the one in Fast & Furious 4 that Vin Diesel stole one of the tankers of gas from.  Maybe, only maybe, would a truck hauling four containers worth of ramen noodles actually amount to close to $100k.

Either way, imagine the lack of enthusiasm for the thief after they’ve stolen the truck and gotten to a safe place to see what they’ve stolen, only to discover that upon opening the cargo bay, they find nothing but ramen.  Sure, ramen is delicious, but it’s not exactly the kind of cargo that a thief could enjoy themselves for too long, considering a single package of Maruchan stock is like 800-1,000 grams of sodium, that even imbibing in a single case of the ramen is more sodium than anyone needs in a lifetime.

And it’s not like they could try to sell it themselves, because how can they possibly hope to undercut a product that retails at every Kroger in the United States for like 10¢ a pack?  Sure, considering they stole it, anything earned is entirely profit, but how discouraging must it be for a thief to move like two crates of ramen noodles, but only come out of it with like five bucks?  The risk and reward ratio of this heist is pretty unfavorable to the thief in this particular instance.

It goes without question that at this point, the truck itself is undoubtedly more valuable than the cargo it was hauling.  But given the fact that semi parts and materials are probably only viable to other semis, I’m going to assume that it would be pretty difficult to move any parts without setting off some red flags along the way.

Ultimately, this is one of those stories where the thief is probably as disappointed as the truck driver to have found out his truck got stolen, and all parties involved are kind of owned.  In other words, it’s my kind of story, since it’s always amusing to me when everyone loses in the end.