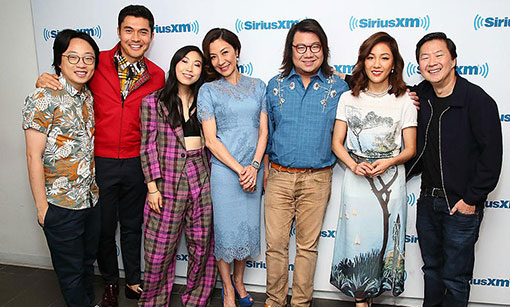 As someone who agrees that Hollywood is whiter than a Republican national fundraiser, I knew it was something of a social obligation that I should go out and watch Crazy Rich Asians.  I never read the book, nor did I have any inkling of an idea of what the plot was about going into it, but I still figured it would be a good idea to support any progression for Asians in a white-dominated industry, if we want to have any modicum of a chance of earning any respect up in this motherfucker.

The movie itself was fine.  Fairly predictable and extremely formulaic, but refreshing in the simple sense that every face didn’t look like Finn Wittrock or Balakey Lively.  Constance Wu carries the film brilliantly, and it’s super gratifying to hear her speak in her actual voice and not as over-the-top tiger mom from Fresh Off the Boat.  I didn’t even realize it was her until seeing her name in the credits although I thought she looked familiar, but Michelle Yeoh’s presence as a cunningly savage rich Asian mom is like an anime where you can feel an aura emanating from her whenever she comes on screen.

It kind of goes without saying that I rolled my eyes at the casting of some hafu named “Henry Golding” as the male lead of the flim, when surely it most certainly could have been cast to an actual Chinese or other Asian guy that didn’t look like a cross between Lawrence from Westworld and a young Ralph Macchio.  But seeing as how this film was being released in white Hollywood (oxymoron?), there had to be some compromise to make sure white power had some degree of a tether to their oppressive natures.  But it’s okay, because as bland and useless of a character Nick Young was, the film had no intention of being carried by him in the first place.

There’s one character in the film whose storyline carries almost zero correlation with the main plot at all, and could presumably not been needed at all whatsoever.  I’m going to assume it’s vastly different in the book and has more of a connection, but for the film’s sake, I’m going to assume it was included probably solely because the actress involved in it is somewhat known, extremely pretty, and needs to have requisite screen time in order to justify her casting.

As for the rest of the film, it had some fun characters and was moderately enjoyable, even with the obnoxious people in the theater, to where I couldn’t decide which was worse between the incessant commentary in Mandarin from the girls next to me, or the incessant commentary from the stereotypical black women who felt the need to very loudly opinionate on everything.

But the film was only part of the whole experience of going to see Crazy Rich Asians; going into it, I knew I was going to want to see what the theater experience was going to be like, seeing the demographics of the people coming into to see the film, and the previews that would be shown for a film of such a targeted demographic.  And those most certainly did not disappoint.

To no surprise, the majority of the people in the theater were Asian.  Frankly, I didn’t even know this many Asian people lived in my general area to where they’d flock to this particular theatre to watch it, but hey, whatever it takes to sell those tickets to make it as hard as possible for Hollywhite to claim that Asians don’t sell tickets before they inevitably do anyway.  But I was more curious about the people who weren’t Asian, or didn’t come with Asians, because I can’t really theorize why they’d want to see a film like this in the first place.

Me being me, the hypotheses are usually nihilistic and horrible, and I just imagine that the white people who are coming in to watch the film are self-hating white guilters who feel an appropriate form of apology to the oppressed Asian culture is to spend some money towards a film featuring Asians.  Seriously, one dude literally looked like the self-hating white guilt character Sacha Baron Cohen plays in This Is America.

Despite being in Atlanta, the number of black viewers seemed to be actually very small.  Granted, the most obnoxious ones there just so happened to be right behind me, propagating the stereotype that they are completely incapable of shutting the fuck up throughout a film, but overall, I barely saw any black people at all.

Which means they certainly missed out during the previews, which was probably my favorite observation of the whole experience.  It’s no secret that previews attempt to reflect the film in which they are preceding, much like kids movies will be the only things previewed during a kids movie, but what would be the case for a film so specially targeted towards Asian audiences?

It starts off fine at first, with an eerily relevant-to-the-times film starring John Cho about a father whose daughter goes missing, and then despite what social media seems to indicate, he learns that he knows almost nothing about her.  It’s supposedly a Sundance winner, or was shown as Sundance, and I’m guessing got the green light almost solely for the fact that they’d be able to utilize its trailer for such occasions specifically like this one, but I’m intrigued, and I’d actually want to see it when it actually breaks in theaters.

But then it goes downhill real fast from there, with the next two trailers being for entirely black films, with the latter being a far-too-real plot of a black teenager being killed by a white police officer, and frankly I don’t feel the need to see a movie about it, when it’s happening on a far-too-regular basis in real life to bother wanting to drop $25 on tickets to be reminded of it.

And because Hollywhite can’t possibly fill trailer time on solely minority-starred films, there’s a trailer for some film with Bradley Cooper and Lady Gaga that I’m certain made the preview lineup, because Dave Chappelle was in it for two seconds, and everyone loves Dave Chappelle, and he just so happens to be a colored fella!

The bottom line is that I enjoyed Crazy Rich Asians, not just for the film itself, but the sheer sociological entertainment of going to the theater for it provided as well.  And if wish for similar amusement, or simply want to buy into the notion that spending money on tickets will break the stigma of Asians in Hollywhite, then I’d advise you go see it as well.