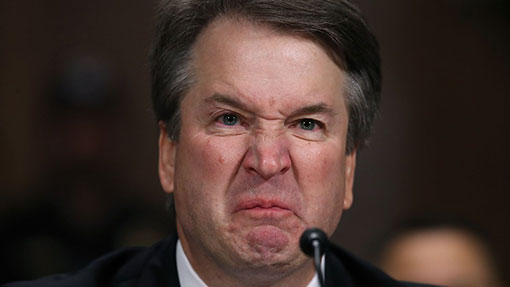 As much as I want to say that I don’t really pay much attention to the political climate of America, I feel like it’s one of those things that people kind of grow into as adults, or maybe it’s just me.  Perhaps it’s because I’m at the age where the decisions of politicians can actually affect me in some capacity that makes me a little bit more astute to them, or maybe it’s the existence of social media that opens my eyes to people I know who are all more well educated and pay more attention to them than I do, which kind of passively makes me curious as well.  Maybe it’s because I like to pretend like I’m pretty well versed in current events, so I like to read or pay attention to the news on a fairly regular basis.  Perhaps it’s all of the above.

Either way, the events of the Brett Kavanaugh saga and the ascendancy to Supreme Court Justice have been something of a big deal in the world of Washington over the last few weeks, and I’ve learned more about things than I probably really would’ve wanted to.  Frankly, there are far way more educated people in the topic of this whole story, but all I really know is that the president nominated this guy to replace a retiring Supreme Court Justice and because liberal America hates the president, they immediately hate his nominee.  Immediately, the nominee’s personal history is dug up in record time, and red flags are raised at the notion and multiple accusations that he has a little bit of sexual assault in his history and that perhaps he shouldn’t be nominated for, y’know, the highest court in the country.

Naturally, it devolves into what everything devolves into these days, a bold line in the sand drawn, and a vitriolic battle between Republicans and Democrats, conservatives versus liberals, or whatever you want to call it that embodies the stark and harsh divide that represents the United States these days.

The thing is though, and I try to be as objective as possible when it comes to stories like this, because I think it’s way too easy for people to pick sides solely based on scuttlebutt of what their social networks sound like, and not necessarily their own independent thoughts.  But frankly, whether or not the accusations are true of Kavanaugh’s past behavior, the bottom line is that surely in the landscapes of America, exist people who are vastly more unanimously qualified to become a Supreme Court Justice than him.

It would be like the president wanted Kobe Bryant on his team, but the people all pointing out his checkered past and his alleged rape scandal and fairly known infidelities; but all along, LeBron James was always available.  It doesn’t really matter whether or not Kobe Bryant did any of the things he was accused of, because LeBron James is pretty squeaky clean in comparison, and would be arguably as qualified to fill the roster, if not better.  Surely, there’s someone equally or more qualified to be on the Supreme Court than Kavanaugh, right?

But because we live in a society whose political atmosphere is more flagrantly and blatantly biased and nonpartisan than ever, even if there were a more suitable judge out there, it has to be Kavanaugh.  And no matter how much logic and common sense that people discuss on the internet about why he shouldn’t get pushed forward, somehow it still happens – the Republicans get their way.

The real question I had after seeing the result though was, is anyone at all really surprised by this outcome?  Because I’m certainly not.

America is hardly a place where decisions are made based on logic, debate and compromise anymore; it’s all about the wins.  And losses.  How a decision in any political arena is declared a win for one party, and a loss for another.  Nothing can be described as a decision being made where a mixture of Republicans and Democrats agree upon aspects of a debate, with the people they represent best interests in mind, where those who disagree with it can take some concession in some compromised condition that can be addressed or revisited later.  It’s all about how one party must win, and subsequently one party must lose.  And because with the ascendancy of the president, the Republicans have stacked the deck in their favor, and have embarked on this winning streak that frequently and perpetually leaves the Democrats on the losing side of just about everything, including this.

Frankly, it’s this mentality that I think really needs to be rectified for the country to have any semblance of civility or healing for the future.  Conflicts can most certainly be settled without so much arrogance from the victors and so much contempt from the losers, but in this day and age, such ability for grace has long been forgotten.

Regardless, I can’t offer up much more hope as far as the rise of Kavanaugh is concerned.  At this point, I’m bet money that even if there were video evidence of him sexually assaulting multiple women, he’d still get the full support of the Republican party, and we’d have a known sex offender representing the highest court in the land.  What puzzles me the most among his supporters are all the women with power who are backing him, despite the fact that women that look just like them are coming out of the woodwork to accuse Kavanaugh of sexual deviancy.  Fuckin’ weird, politicians are, as well as spineless and sad.