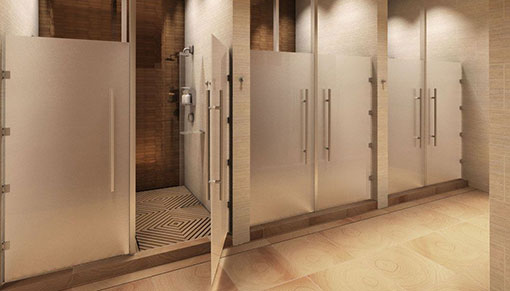 Gyms on Fridays are pretty much the best time in the world to go to the gym.  Mondays are often times the worst, because it’s the one day when everyone feels guilty for the shit they do to themselves over the weekend, and they overcompensate by making it a point to go to the gym on Mondays, thinking a single day of exercise will absolve them of whatever booze and/or junk food they plowed into their bodies the three nights prior, so the gyms are obnoxiously packed and I want to kill every motherfucker who impedes my ability to have a routine workout.

On the flipside, Fridays are pretty much dead.  Be it pleebs falling back into their usual routines of giving up, giving themselves a little bit of an extended weekend, or any other weak reason, by Friday, gyms are nice and empty, and I’m more often capable of having a nice relaxed workout, without many if any people, interfering with my routine.  And today was no exception, as I was able to have my pick of the benches, never had to look for a single weight, and proceed with my entire routine without any interruptions.

I was in a good mood after finishing up my last lifts.  And then I went into the locker room.

And it was fucking slammed.  Motherfuckers all over the fucking place like cockroaches scattering when you walk into a dark room and turn off the lights.  Everyone in varying states of undress, but just about all getting ready to hop into the shower, to which there are only six of at my particular gym.  When I gathered my effects to shower, I turned the corner into the shower area, and was luckier than a leprechaun at the end of the rainbow that there was one left, resulting in me not needing to wait.  But the point was that, for some unknown reason there were way more people in the locker room preparing to shower, than there were dudes that actually worked out, and actually earned their shower.

That’s right, I firmly believe that gym goers really should earn their god damn showers.  If you put forth the work, you earn the right to relax and cleanse one’s self, as opposed to these fucking whack jobs who clearly came to the gym solely to use the facilities and none of the equipment.

Given the fact that every one of these guys was white, I’m inclined to chalk this up as something that white guys do, aside from other obnoxious gym locker room tropes, like talking about Europe, occupying more than a single locker at a time, or leaving their gym bags all over the place, forgetting that Consuela or Ines isn’t around to pick up after them.

Seriously though, I can’t help but feel annoyed that this is a thing that clearly way more people than I’d imagine actually do.  It’s not like I was in such a zone on the gym floor that I was oblivious to the people around me; during my workout there were literally 4-5 different males and 3-4 women that I noticed actually working out, but when I went into the locker room, there were like 20 completely different dudes all getting ready to shower and prepare for the work day.  I already have a complete lack of respect for anyone who shows up to the gym after me and then somehow finishes up before I do, especially since I condense all my workouts to around 45 minutes these days.  But to think that there are guys that simply skip the whole working out process outright and go straight to finishing up?  That’s some real gross Ben Affleck behavior that I simply can’t condone.

And what really sucks is that there’s nothing I can do about it except brog about how much I hate it.  And whenever I have any gripes about gyms, it always goes back to fantasizing about if I had my own gym, and all the litany of Draconian policies that I’d put in place on unsuspecting members, like having lifeguards that narc on people who don’t re-rack weights or wipe off their stations, or having showers that don’t work unless there’s some proof of having worked out.

I know it’s silly how much this annoys me, but god damn it, I take going to the gym and working out seriously.  It really chaps my ass that there are a bunch of pussies out there that actually bother going to the gym, only to go straight to the showers without actually having done any fucking exercise.  Fuckin Ben Afflecks.