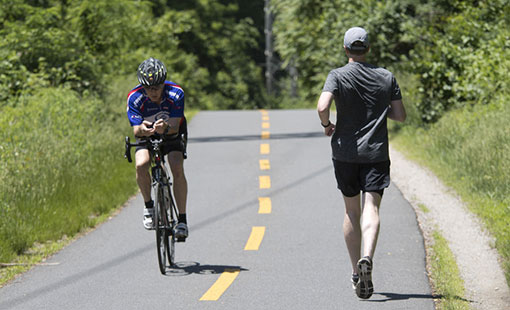 For the last few months, mythical gf has been training for a half marathon.  Being the long-time runner that I am, I’ve decided to join along for lots of her runs, as it’s never going to hurt me to get out there and run and burn some extra calories here and there.  As part of the training, we’ve been going out to trails and extending her distance little by little, in preparation for the eventual 13.1 mile course.

We’ve found a trail that we’ve decided is the ideal place to train and stretch out distances, and over the last few months, we’ve been routinely spending a day every weekend out there to log some miles, burn some calories and in my case, sweat out buckets.  With the weather finally changing from summer into fall and cooling off, the runs have been rather pleasant lately.

Except, for the existence of all these fucking bicycles.  Look, it’s a multi-use trail, and I understand that bicycles have just as much right as the two of us and every other walker/jogger in Georgia does.  But given the fact that the vast majority of bicyclists on the trail are all these mega-douchebag-tryhard bike riders, by the time our runs end, I always make some sort of proclamation about how much I’ve grown to hate bicyclists now.

I’m talking about these shitheads who roll into the parking lot in Audis, Lexuses and Porsches, are wearing these onesies that would raise the eyebrows of even the most dedicated Queer Eye viewer, and from what little I do know about bicycles, are unleashing these bicycles with blade wheels, carbon fiber bodies, and other ludicrously priced hardware meant to make them as fast as possible.

And naturally, they capitalize on the expensive toys’ capabilities, and scream down the path as humanly possible, despite the fact that the trail’s width is maybe 10 feet wide, very well-populated, with a variety of runners, walkers, people with baby strollers, or dog walkers.

But it’s okay that they’re often traveling at speeds that would undoubtedly kill another human being in a collision, because they’re always wailing out “TO YOUR LEFT.”  In fact, my ire isn’t limited to just the assholes preparing for the Tour de Fuckface, but any bicyclists who think that a multi-use trail is theirs first, and that everyone has to watch out for them.

The presumption that all non-bicyclists will hear their obnoxious to your lefts is absurd, considering those that exercise are almost always wearing headphones; much like most of these bicycle douches are, so it’s absolutely completely hypocritical for things moving at 25 mph+ to expect those who aren’t, to be able to have ample time to hear them, if they just so happened to not be minding their lefts. Frankly, all these bicycle shitheads need to be better at being mindful of not hitting pedestrians, because they’re not the ones operating vehicles that can kill on impact.

As much as the teams of assholes who travel as fast as their little legs can pedal them annoy the shit out of me, I think it’s the groups of fun riders that chafe me even more.  Especially when they start calling out to your left, when they’re going at speeds where they’re barely going fast enough to remain upright, and wobble in unsteady lines and make them more of a liability to hit others.  There’s this one family in particular that comes to mind, where the daughter that’s maybe like 6-8 years old is always out in front, and is the one who gets to tell people to your left; because it’s very obvious that everyone on bicycles has a raging boner for the idea of telling people to get the fuck out of the way, with passive aggressive to your lefts.

Really though, I’m completely over bicyclists now.  Nothing is going to change, because it’s a public trail and bicycles have all the right in the world to be on it as I do, but now I just have a massive disdain for them now.  They can wail to my left as much as they want, but I make no promises that I’ll actually hear them, and if they’re going at a speed where they can’t handle it, then they should slow the fuck down and/or get better at bicycling.  If cars are subject to speed limits, multi-use trails should absolutely have speed limits on bicycles, because there’s absolutely no difference in danger when it comes to cars hitting things, from bicycles hitting humans.

The bottom line is fuck bicyclists.  There’s a massive disparity in privilege on the trail when it comes to courtesy, and when the day is over, bicyclists are way bigger douchebags than pedestrians.