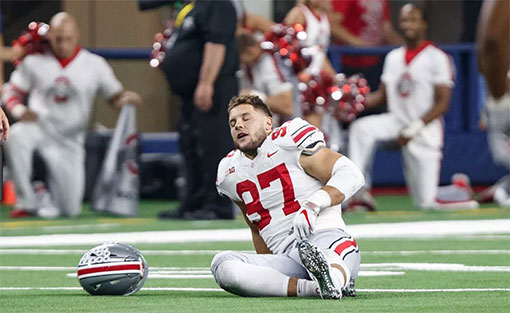 This is what’s wrong with sports: theOhio State defensive end Nick Bosa drops out of school after getting injured to “prepare for the NFL draft”

But basically, what we have here is a story of a highly-touted star athlete with professional aspirations who got injured.  But instead of rehabbing his injury and staying in school while doing so, he drops out, and cites that he needs to prepare for the NFL draft.

I know I rag on theOhio State a lot, and I never tire of seeing them lose.  But the fact of the matter is that famous schools are rich schools, and rich schools are often prosperous schools, even for those pleebs enrolled that aren’t student athletes and play football.  To justify their position in the collegiate world, theOhio State is still a very good school for academics, and sure it’s no secret that the vast majority of football players don’t actually have to learn anything and are handed phony-but-still-legitimate degrees, but that’s still contingent of them sticking around long enough in order to fulfill their credit hours.

Nick Bosa dropping out of school because his football season prematurely ended is basically the greatest message of how unimportant education is as long as you can play a sport.  He pretty much had a free ride for a free degree, as long as he could throw his body against other meatheads and occasionally rush a quarterback 4-5 times a game.  An injury wouldn’t have ceased such a sweet deal, because technically Bosa was a junior, and as long as there was the thought that he could come back and keep playing, the free ride would have undoubtedly continued.  And even if everyone already didn’t know he was going to go pro after 2018, it’s not like theOhio State could just pull the rug out from under him and renege on the scholarship, unless he was just straight up a criminal or something.

Instead, Bosa just drops out, doesn’t finish a shallow paper degree, and puts all of his eggs into the basket that he will definitely get drafted and go pro; something that probably would’ve happened even if he didn’t drop out, because it doesn’t take a genius to know he’ll be recovered by the time the 2019 NFL season gets underway.  As much as I’d love to see NFL GMs collectively question his judgment and maturity for dropping out and collude to not draft him and let his uneducated bum ass rot in the real world, that’s just not going to happen, but it would be some impactful life lessons if it did.

But as much as I’d love to continue calling Nick Bosa a dumbass, the thing is that such a decision was hardly solely his own.  The Bosa family is a known family of meatheads whose patriarch is a former pro, and Nick’s older brother Joey Bosa, is also in the NFL currently, also having played for theOhio State.  Undoubtedly, the decision was a family one because frankly Nick’s probably not smart enough to make adult decisions on his own, because given the fact that he wasn’t going to play again at all this year, it’s not like his draft stock was going to be at all hurt staying enrolled in college.  But given all the meatheads in the Bosa clan, I guess nobody should really be surprised.

They basically remind me of the family in Jerry Maguire, that was basically manufacturing the career of the prep-QB played by Jerry O’Connell.  But instead of one kid with the golden arm, it’s a family of meatheads with athletic experience.  I almost wanted to compare the Bosas to the Mannings, but the difference is that Archie had the wherewithal to make sure that Peyton and Eli were at least somewhat educated before going pro, which is clearly something that isn’t of any importance to the Bosa clan.

“Preparing for the NFL draft,” what kind of bullshit is that?  Just how does Nick Bosa prepare for the NFL draft that he couldn’t do while still enrolled in school?  It’s not like he was even remotely required to attend classes in the first place; I’m fairly certain he could’ve rehabbed and prepared just fine at theOhio State’s likely world-class facilities, and on the school’s dime instead of the Bosa’s family funds.  Is he going to study for the Wunderlich test or something?  Read some flash cards maybe, to recognize the difficult grown-up words that might appear on it?

The point of this entire diatribe is that it disgusts me, the lack of regard for education, as hollow and fake as it probably already was for a ringer athlete, the Bosas have.  Fewer things are as invaluable as an education, and a guy like Nick makes me sick on how he’s throwing away a free one, from a reputable institution, because he’s putting his ability to run into other fat men first and foremost.  Frankly since it’s inevitable that he’s going to make it into the NFL, I’d be pleased to see him have one of those careers where he simply can’t cut it in the pros, ends up on  the Raiders, still sucks, and then is relegated to the practice squad for the Bengals, before ending up in the CFL, sucking there too, and then retiring at 27 with a fraction of the earnings of Joey, and with no degree to tout when he’s forced to eventually look for a real human job.