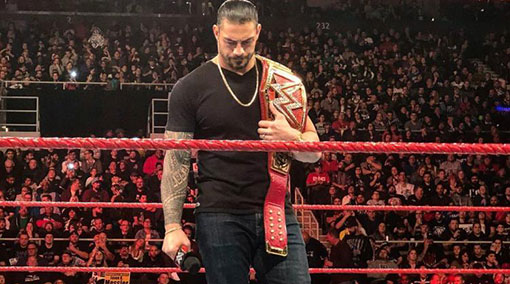 One of the first thoughts that went through my head when I heard the news that Roman Reigns had leukemia and was going to relinquish the Universal title and take a leave of absence from the WWE was: this is what the WWE was going to start the show with?

Sure, I’m as surprised as the most casual of wrestling fans are, because I don’t use Twitter nor do I have any sort of sources be on top of every little tidbit of wrestling news, and it’s certainly surprising and sad to hear of one of the top guys in the industry to be derailed like this due to a terminal illness.  Obviously as both a wrestling fan and a human being, I would like to see Roman Reigns beat leukemia back into remission again and return to the ring, and I hope treatment is both manageable and successful.

But my skepticism and disappointment, as cliché as it may seem, remains with the WWE itself, whom as all die-hard wrestling fans know about the business, is that the show must go on.  No one man or woman is bigger than the industry, and the show does not stop for anybody.  The Royal We get it; however that’s more applicable to the unpredictable and unexpected, the things that cannot be controlled or anticipated, like injury, emergency and death.  The fact that the WWE continued on with Over the Edge in 1999, even after Owen Hart fell to his death in the middle of the show is proof to this staunch and concrete mentality.

Roman Reigns’ leukemia announcement though, that’s different.  Despite the fact that the biggest tryhard internet smarks probably all knew what was up before the cameras started rolling, as much as the WWE might not want to believe it, there are more casual fans out there that do not live and die with the minutiae of the internet and might not have been aware of the news.  The choice of when to air the Roman Reigns segment was entirely controllable, and I have to question the WWE’s choice to emotionally powerbomb the audience in the first 25 minutes of the show, and then expect business to go on as usually for the remainder of a three hour program.

I see both sides of the coin, because it’s no secret that the third hour is kind of a drag, and the WWE often times phones it in, in hour three.  It’s later, fewer eyes might be on the tv by then, and if the goal is to get as many eyes on the segment as possible, then hour three is not the logical placement, even if the idea of “the main event” is supposed to be saved for last.  An announcement of this importance should be done when peoples’ attentions are at their peak.

However, this is the kind of announcement that absolutely derails everything.  Reality doesn’t often permeate into the world of professional wrestling, and when it does, it’s very much a big deal.  And as much as professional wrestling is full of trolly smark fans who love to troll live shows and act contrarian to fuck with the business, they’re still going to these shows and buying merchandise because at the end of the day, they’re still fans; and still human beings, who will most likely be impacted by the very real news of a cancer diagnosis of a very prominent figure in their preferred entertainment.

Starting the show with Roman Reigns’ leukemia announcement has a profound effect on the rest of the show, to where large portion of the fans aren’t as fully engaged as the company might hope they would be, and it’s simply hard to care about the rest of the card after such a bomb is dropped onto the arena.  Nobody cares about Lio Rush trying to hype-man for Bobby Lashley at that point.  It’s hard to pay much attention to women trying to drum up interest in Evolution.  Paul Heyman does an admirable job as usual stirring up emotions on the mic, but it’s a further reminder of Roman Reigns and his situation when they’re talking about the match that will no longer feature Reigns, but his now-vacated Universal Title will be up for grabs between Brock Lesnar and Braun Strowman.  And as admirable of a hype-man that Titus O’Neil is for Susan G. Komen, there’s a twisted irony and visible discomfort coming from breast cancer survivors holding up victory belts on the same night that a guy goes on national television to announce his cancer diagnosis.

And as good as the main event was with Dean Ambrose and Seth Rollins winning the tag team championship from Dolph Ziggler and Drew McIntyre, it’s no more apparent that the first-hour lovefest between the Shield brethren needed to be done and put to bed as soon as possible, so that the storyline of Ambrose turning on Rollins could still happen, a long, long two and a half hours later.  Suddenly, one of the realest moments of the night was rendered pointless because the show must go on, and couldn’t simply take a week’s break.

Ultimately, the WWE is a lot like Gene Simmons of KiSS, in the sense that there is absolutely nothing they can do and not make money in the process.  Simmons might sell ad space on his family’s RV while they go on vacation, and the WWE will gladly capitalize on a terminal illness in order to drum up awareness and PR goodwill, which obviously has financial benefit in some facet.

The irony of this situation is that in spite of the unfortunate news of a guy having cancer, this is a rare instance of a creative get-out-of-jail-free card to the WWE where they can kind of improvise a new direction in creative.  I haven’t cared much about the main roster storylines for a while, and I know for certain that I’m not the only one who feels this way.  With Roman Reigns stepping out of the picture, this opens up the door for many hard workers on the roster to get an opportunity to step into advancing roles, and hopefully the WWE can capitalize and elevate someone into that golden boy spot that Reigns had occupied.

But if I’m a betting man, then Brock Lesnar wins the vacant Universal title, in order to co-drum up interest for a potential WWE Champion vs. UFC Champion against Daniel Cormier in like February.  Either that, or John Cena will be brought back.  While Cesaro and Rusev continue to be underutilized, but that’s just my opinion.