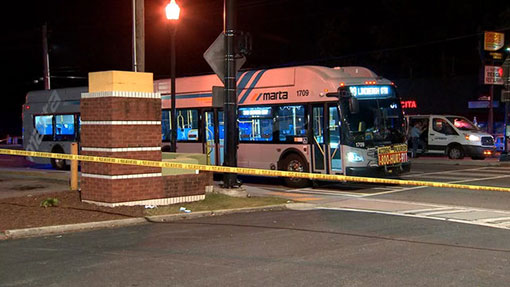 Yeesh: MARTA bus full of passengers runs over a person, killing them

It’s been a while since I posted anything about MARTA’s fuck-ups, and it’s not to say that there haven’t been any since the last time I did, it’s just that they’ve never really been anything worth talking about, or the fact that I hardly have the spare time I once did, and simply didn’t get to them.

But I guess if there were ever a time to bring one back out, running over a guy seems like good as time as any to bust out the ol’ point and scowl at what MARTA did now trope.  Not that it’s ever really truly funny whenever lives are lost, but given the Darwinian manner in which this occurred, it’s still something that piques my interest enough to put some words down about.

So whenever the notion of someone getting run over by a vehicle is mentioned, I have to imagine most people envision a moving vehicle approaching a human being, and running them over.  But in this particular instance, a human being managed to get run over while tailing a vehicle, moving away from them.  I’m not entirely sure how someone behind a moving vehicle somehow ends up underneath it, but if it was ever going to happen, naturally it involves a MARTA bus.

Initial reports say that a possibly drunk person was chasing after the MARTA bus as it was pulling away, slapping it, trying to get them to stop so that they could presumably get aboard.  It’s a murky picture to imagine, because either the guy was really fast in spite of their inebriation, or the bus was going the perfect speed to where a human being could keep up and slap at it while simultaneously having enough momentum to drag someone into a wheel well, run them over and kill them.

Regardless, it still ends up with a perfect storm of ironic chaos that results in a fatality, with MARTA’s name attached to it, regardless of the fact that it wasn’t their fault, which feeds into the narrative that MARTA can’t do anything right, except Ride or Die.