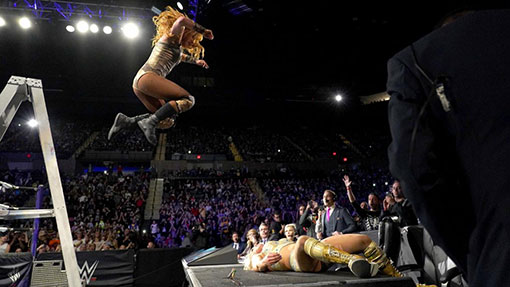 Warning: there will probably be spoilers; not that it really matters because who knows how many eons past Evolution it will take before this ever sees the light of day on the internet.

When it was announced that WWE was going to do an all-women’s pay-per-view show, I had a couple of knee jerk reactions.  One was that it had the capability to be the best show of the year, due to the kid gloves that the WWE would undoubtedly have to treat a show of such a nature, and two, that it was a show that could not absolutely afford to fail.  Failure would wreck a tremendous amount of work and equity that the women superstars have put forth to building their brand, and would send things back in time at least a decade.

Fortunately, with the level of talent and the volume of it now present in the WWE, it didn’t seem like failure seemed very likely, especially since the WWE is known to be capable of putting a good show together when they actually give a shit about it.

To no real surprise, Evolution was an outstanding show that I feel lived up to the hype, and truly delivered on what the primary goal of the show was supposed to be: this is women’s professional wrestling.  Sure, there were some booking choices that I probably wouldn’t have made as an armchair booker, but when the show had ended, I can confidently say that the good of the show far outweighed the negatives.

Even some of the matches on the undercard that I didn’t really expect to be that great were better than expected, as if viewers could feel the sheer will and empowerment of the superstars, or the WWE actually let a lot of these women unleash a little bit more from their arsenals than they normally would be allowed to on television.

I’m glad that the show started with Trish Stratus and Lita vs. Mickie James and Alicia Fox, because this was undoubtedly one of the matches that I would’ve pegged to have been one of the weaker ones of the card.  Selling solely based on nostalgia and the fact that both Trish and Lita still look fantastic and are in ring shape, it was to my understanding supposed to have been Trish vs. Alexa Bliss and Lita vs. Asuka, before a series of events involving some Alexa injuries and speculation that Asuka was hurt that transformed into this tag match that combined everyone together instead.

Alexa still received the pop of the match, coming out in an Alice in Wonderland inspired ring attire, looking fine as hell as always, and it’s a shame that she couldn’t perform, because I think she would’ve sold like a champion and put on a good show.  I’ll gladly admit that both Mickie James and Alicia Fox elevated their performances to carry the rusty Trish and Lita, but it’s apparent that neither have much fan support, positive or negative, and ironically what was meant to be old vs. new, featured four women whose individual tenures weren’t really that far apart from each other.

As much as I thought battle royales were the coolest things in the world when I was a kid, as I grew into a smark, I realized that they were really cop out events that occurred primarily to make sure that a large number of performers got screen time in as little investment of time as possible.  Sometimes, to make sure that lots of people get a slice of the financial bounty at the end of the night, other times to obscure when particular superstars aren’t at 100%, and need to be surrounded by a proverbial mosh pit of others to hide in plain sight.  And then there’s the occasional punishment by the company where a superstar is demoted to a battle royale where they’re just unceremoniously a part of a pack, instead of allowed to shine.

And in the case of this women’s battle royale, it was so that they could bring back a litany of former women superstars, and put them in a match where their ring rust wouldn’t be exposed, and they could relive a few minutes of glory, and be acknowledged for their contributions to the sustenance of women’s wrestling.

But what I don’t like about battle royales is that often times, the larger competitors are either the odds on favorite, or eliminated first, by a large collusion of opponents who understand the importance of eliminating the biggest dog in the fight.  And when Nia Jax wasn’t eliminated in the first minute of the match, I immediately had this suspicion that she was going to win, mostly on account of the fact that aside from the trio MMA washouts in NXT, nobody looks like a convincing contender to Ronda Rousey on the main roster.  And despite the show’s best attempts to have Ember Moon eliminate the much larger Jax, the finish was pretty predictable once the ranks started thinning and Nia Jax was still in.

Piggybacking onto my recent love-fest for Toni Storm, it should be no surprise that the Storm vs. Io Shirai match was my #1a match I was looking forward to.  The second I saw that Storm was in the second annual Mae Young Classic, I had her slated to win, solely on the close call she had the year prior, and the fact that she was already so over.

As the tournament transpired, I felt that my prediction gained traction, based on the fact that I didn’t think there was any way that the WWE was going to have yet another Japanese woman win another major company event, especially after Asuka had won the Royal Rumble and Kairi Sane had won the first Mae Young Classic.  And with Meiko Satomura and Io Shirai trucking through the tournament, I figured it was probably a shoe-in that Storm was going to win, but based on how Storm vs. Satomura was booked, it planted enough seeds of doubt that the WWEeb might actually have another Japanese woman win, again.

Honestly, I think Storm vs. Shirai could have been a little bit better. It was definitely no Storm vs. Satomura, and was a perfect example of how watered down things become once they leave the free performing grounds of Full Sail, but it was still a decent match regardless.  Once again, I found myself fist pumping when Storm pinned Shirai to win the trophy she was denied the year prior, and I was very pleased to see Toni Storm emerge victorious.  The sky’s the limit for Toni Storm, and I’m glad that the coming out happened at a monumental event like Evolution.

The six-woman tag match between Sasha Banks/Bayley/Natalya vs. the Riott Squad I did not have high expectations for, but turned out to be a pleasantly surprisingly good match that either showed the way true six-person tag matches could be, or all these talented women had the reigns taken off and were simply allowed to work.  The narrative of the Riott Squad utilizing numerous, frequent and sneaky tags to constantly befuddle the Sasha/Bayley/Natalya team was great storytelling, and could serve as a template of how good six-person matches could be if told correctly.  And it was refreshing to see girls like Liv Morgan and Sarah Logan actually get a chance to actually work, even if the end result was really no different than any other episode of RAW where one of them is usually the one to do the job in the end anyway.

Kairi Sane vs. Shayna Baszler was probably the #2 match I was looking forward to, because despite the fact that it was under the WWE banner, it was still an NXT match, and there was little reason to believe that they would break too much from the mold of superior performing.  I figured that Baszler was going to win the title back, because her MO has pretty much been get beat, redeem herself by choking opponent out in the rematch, as she’s done with Ember Moon and now Kairi Sane.

However, I didn’t anticipate the arrival of Baszler and Rousey’s lackey MMA washouts in Jessamyn Duke and Marina Shafir yet, because from what I understand, they’re still greener than baby shit at the Performance Center, and I figured it would be way later down the line before they started to make their way into the Universe, but I guess if there was ever any more appropriate time for them to make a splash, it would have been at Evolution, during a match with their BFF in Baszler.  Ironically, this works out in the sense that it injects some fresh faces into the NXT women’s division, gives Sane some new opponents, and sets up Baszler to have some lackeys and create a dominant women’s stable.  Unfortunately, it also means we’re going to be subjected to some baby-Rouseys who can’t work professional wrestling and will probably hurt some people in the process.

Finally, it brings us to Becky Lynch vs. Charlotte Flair, which was my #1b match that I was looking forward to.  I’m super high on Becky Lynch, and I could probably write at least two more posts about just her, about how I think she could carry the company if the company could set aside the male ego long enough to give her a chance.  But either way, it was a no-brainer that this was going to be the match of the night, and they did not fail to deliver.

With every swing of a kendo stick or a steel chair, Becky and Charlotte demolished not just each other, but the notion that women’s wrestling is at all inferior to the male product.  Numerous times throughout the match, I’d wince and ohhhh from a hard hit or a risky spot, and the two showed tremendous stamina and ability at telling a compelling story matched with brilliant work rate.  And the cherry on top is the clean finish where Becky came out on top, which means the rise of Becky can continue on, and hopefully the company can really realize the gold mine they have, if they’d just man up and use it.

Oh yeah, Rousey vs. Nikki Bella happened to.  Yeah, this was the worst match of the night.  This was basically the female equivalent of the Triple H vs. Chris Jericho main event at Wrestlemania X8 after The Rock and Hulk Hogan tore the house down and emotionally drained the audience.  And this isn’t so much a cliché knock on the Bella Twins, but more of a disdain for the sheer kowtowing to the existence of Ronda Rousey in the WWE, because she’s greener than a rainforest, has earned nothing in the wrestling industry, but is over and a champion solely because it’s what’s best for business.

The only positive thing I can say about the match is that Nikki Bella was the sacrificial lamb to Rousey, because that means the WWE didn’t burn anyone with any actual talent to the seemingly bottomless abyss that is the Ronda Rousey hype train.

They couldn’t all be winners, but that was kind of predictable as long as Rowdy Ronda was on the card.  As a whole, Evolution was still a solid show, and I feel like it was very much a good enough show to warrant doing this yearly.  By utilizing all facets of the company like the Mae Young Classic to the inclusion of both NXT Women’s championships, there’s plenty of content to fill another show.  Perhaps by next year, the fans will get what the signs were clamoring for: women’s tag team championships, but let’s be realistic – why should we have to wait that long?